Among the classical performing arts of Kerala, Thullal is distinct for its simplicity of presentation, wit and humour. It follows the classical principles of Natyasasthra (a treatise on art compiled in the 2nd century B.C).

The costume is fascinating. The dancer wears a black cloth around his head with a band of tender palm leaves that give the impression of a crown. Ornaments that look like lotus blooms, made of palm fronds adorn the arms and wrist, and dozens of bead necklaces worn round the neck. A red waist band with a long length of white cloth looped around it forms the skirt typical of the Thullal costume. 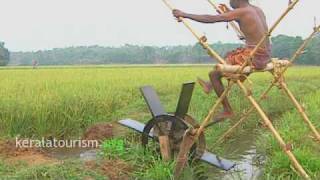