About twenty-one elephants in the traditional attire line up with colourful parasols; swaying venchamarams (white tufts) and alavattams (peacock-feather fans)! Surely a spectacle you wouldn’t want to miss. Then ensure your presence during the annual festival at the Sree Ruthira Mahakalikavu Temple, popularly known as Uthralikavu Pooram.The festival is held every year in the Malayalam month of Kumbham (usually falls on February / March).

Sree Ruthira Mahakalikavu Temple is dedicated to Goddess Kali. Uthralikavu Pooram is the most famous event in the region. It is an eight-day celebration highlighted by day and night elephant processions. Traditional musical ensembles like the Panchavadyam and the Pandimelam add rhythm to these processions. The festival also gives a chance for the spectators to enjoy the temple and folk art forms of Kerala.

Watch the video of Uthralikkavu Pooram 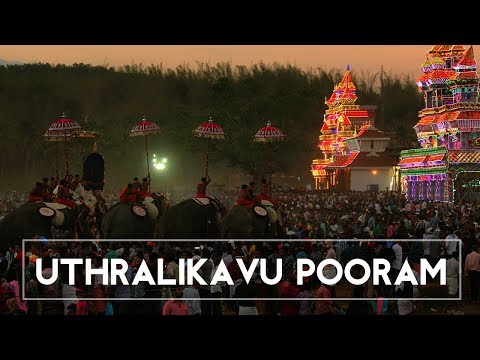