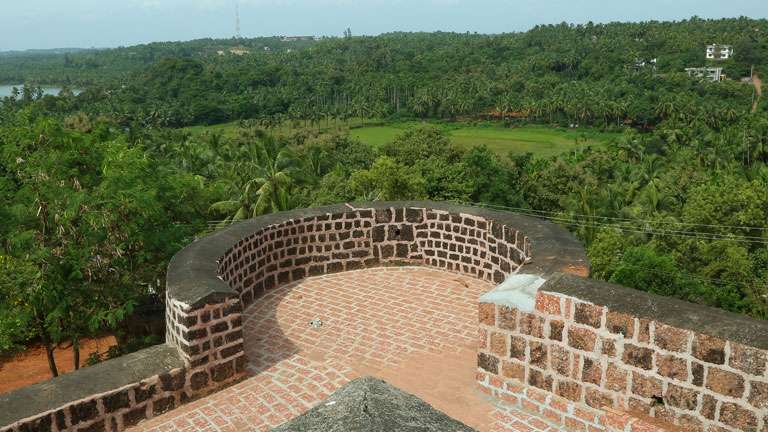 South-east of Kasaragod town, about four kms from Bekal, stand the ruins of the Chandragiri fort.

History
In ancient times, River Chandragiri, which flows near the fort, bordered the two kingdoms of Kolathunadu and Tulunadu. Later, the region around the river came under the Vijayanagara Empire. When the empire fell, the Keladi Nayakas, who had carried out the administration, took control of the area.

When Shivappa Nayak took over the reins, he renovated and built many forts. One of them was the Chandragiri fort, which he built in the 17th century. The fort is now managed by the Department of Archaeology.

Ambience
Near the confluence of the Payaswini River and the Arabian Sea, remnants of the Fort can be seen, on a small hill on which it was built. The ruined fort is about 46 m above sea level and covers an area of seven acres. The old laterite walls that overlook the sea still bear the marks of the cannonball attacks. The incessantly flowing river and the estuary where the river meets the sea are visible from the Fort. It is a delight to watch the sunrise and sunset from the ruins of the Fort.

The ancient Kizhur Sastha temple and a Mosque are also situated nearby the Fort.

Speedboat and houseboat rides can be arranged on the backwaters to visit the nearby islands.