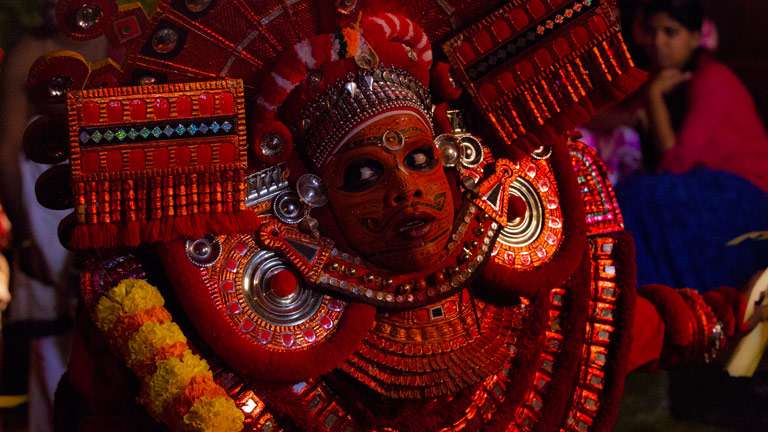 An integral cultural symbol of North Malabar, Theyyam is a socio-religious ritual performed since remote times. The Kolathunadu area i.e., the North Malabar of today (comprising Kannur and Kasaragod districts, Vadakara, Quilandy of Kozhikode and Mananthavady of Wayanad) is famous for this art form. Theyyam is otherwise known as Kaliyattom.

Theyyam is a ritualistic performance which has elements of dance, mime and music. There are various kinds of theyyam like the Raktha Chamundi, Kari Chamundi, Muchilottu Bhagavathi, Gulikan, Pottan and so on.

In ancient times every village of Kerala had its own common shrine called Kavu and Kaliyattom was performed in front of it. Each manifestation in a Kaliyattom is known as Kolam, which means 'shape' or 'form'. Gods and Goddesses have their own peculiar kolam, each with particular features of face painting. It takes eight to ten hours to paint the face of certain kolams, according to the strict rules of tradition. The costumes are characterized by elaborate headgear, make-up and ornaments which, fitted and done to perfection, produce a supernatural effect.

The term Theyyam is believed to be a corrupt form of 'deivam' meaning God. God is believed to enter the body of the Theyyam performer and, hence, believers consider him as a visible manifestation of God and seek blessings. The dance begins as soon as the spirit of the deity enters the performer and lasts until the performer comes out of the trance-like mood.

Theyyam begins with an invocation (thottam). According to traditional beliefs, after the thottam, the performer gradually metamorphoses into God and dances to the beat of folk instruments like chenda and elathalam.