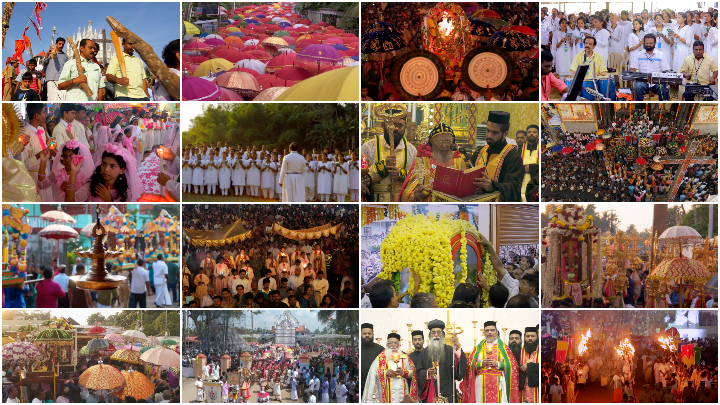 The book of Éxodus of the Bible speaks about the Jerusalem temple that was considered to be sacred by the Jews.  Devotees reach the temple thrice a year for festivals, as per the diktat of Jehovah. Passover, Pentecost and the Feast of Tabernacles are the three great festivals of the Jewish year. The elderly men would all be there. The Jerusalem Synagogue would be filled with thousands of devotees. They would reach there with the animals to be sacrificed. The cost of a sheep was four dinars, of an ox, hundred dinars and of a pair of doves, one gold dinar (Angamaly, Varghese, Chenkadal Muthal Chavukadal Vare).

During the age of the Old Testament, the offerings reaching the church were cooked and given to the faithful. The Love feast still being conducted in churches is only a continuation of this tradition. The first produce of a crop is given to the church as an offering. This is being given to the Saint who protects the crop from the attack of snakes and other animals.  The fowl, ox and goat meant for offering are reared at home with great attention. The offering of fruits, tubers, animals and birds nurtured by one, is an unseen pact with the Divine in which there is an understanding that what is protected will be given back. Traditional food items of the State like Achappam, Kuzhalappam, Kozhukatta, Neyyappam and such others are given as offerings to the church. Another is a feast with rice and tubers, which is still there as part of the meal at the Feast of St. Joseph, in the church named after him at Kannamaly.  Similar feasts are held in all the churches named after St. Joseph. The Feast of St. Sebastian which is similarly celebrated all over Kerala is called the Feast of the Arrow.

The chicks offered at Edappally and Kadamattom are auctioned on the church premises. In Puthupally, it is cooked and served to the devotees. Domestic animals are the main offering at Kolanchery church. This is given for the blessings of Muthappan. Most of the offerings given to churches are linked to farming and agriculture.  Coconut is given as an offering in all churches.  Offerings are being made to guard paddy from pests. The Puthari Feast of the Mother is observed on September 8 after harvest. The month of May is dedicated to Mother Mary. The book Matha Vanakkam written by Nidhirikkal Mani Kathanar and printed at Mannanam St. Joseph’s Press was released in early 20th century.  The song "Nalla Mathave Mariyaye..." written by K. W. Poulose of Kanjoor is included in this book. The Vanakka Masam Novena is observed in churches and homes. The conclusion of this festival is with a feast. A delicacy made of rice, jaggery and coconut is also served as offering in certain churches. Thamukku, another typical Keralite dish made of rice powder mixed with plantain is served in Kudamaloor, Koratty, Karingachira and Alangad churches. Fruits are the main offering in Marian churches. Virgin Mary is considered as the saint of all agricultural produce and hence Poovan variety of plantain is the main offering at Koratty. The offering at the Feast at Kudamaloor Church is very significant. Charcoal, swimming, coir rope and areca nut leaf bucket, and Thamukku are some of the main offerings at the church.

A rice preparation with sugar and milk is the main offering at the agrarian villages, like Aarakkuzha, Kuravilangad and Kallorkadu (Champakkulam). Neyyappam, pepper, broom, oil, candle and coir are also there. The boat race at Pallipuram church is quite reputed. Fish and meat are served at the feast on the Feast day here.  Boats venturing into the sea anchor here during the Feast. Rice gruel is prepared as an offering, and served after service, on all days, at Arthattu Church.  Boiled horse gram and Pappad are also served along with the gruel.  Oil is the main offering at Kanjoor church. This oil is used for lighting up the huge lamp, called ‘Ana Vilakku’, presented by Sakthan Thampuran.

Unniyappam packets are distributed in churches as offering. This was something emulated from the system in vogue at Sabarimala. This has become a delicacy in Christian homes only quite recently. Offering oil is very common at the Jacobite churches at Kothamangalam, Kaduthuruthy, Kuruppumpady, Thripunithura, Nadamel, Akaparambu, Kadamattom and Kunnamkulam.  Most of them have lamps lighted round-the-clock, and hence need lots of oil.

Payasam (a sweet broth) offering and feasting are there in Kannamali, Vallarpadom and Chettikad churches. Certain Catholic churches observe the custom of cutting the Monte Thursday loaf. INRI loaf and milk with spices are also served on the occasion. Juice of the leaves of bitter gourd and kanjiram would also be distributed in churches on Good Friday as a reminder of the juice given to Christ on the cross.