A martial art with a legacy of more than 3000 years, Kalaripayattu, the traditional martial art form of Kerala is regarded as the oldest and most scientific of all martial arts in the world. 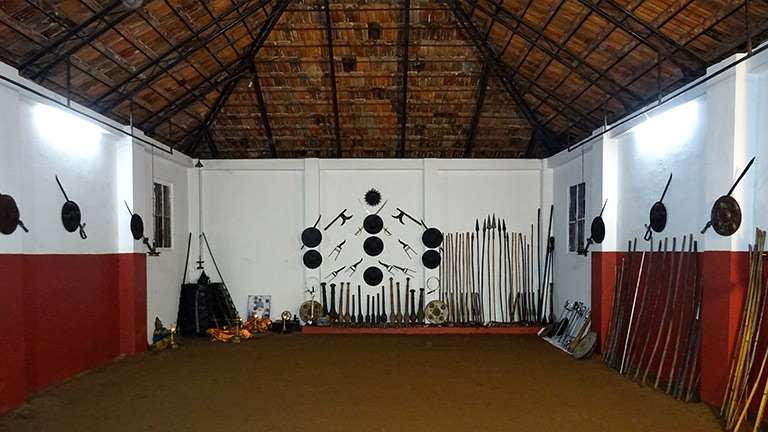 Typically, Kalaripayattu training takes place in a kalari or arena. It is made by digging a rectangular pit (42 feet long and 21 feet broad) in the ground, six feet deep. The mud is compacted to form an even-levelled floor, and a thatched roof raised on two main pillars (21 feet in height and erected on the eastern and western sides of the kalari) covers it entirely. However, the kalaris where full-fledged duels are held are larger. They are usually 64 feet long and 32 feet broad. Soil is used to pat down the surface soil and prevent dust from rising. What is noteworthy is that cow dung was never used to plaster the floor as was customary in nearly every house in Kerala in olden times. Entrance door on the eastern side opens to a set of steps that leads down to the hall. Low parapet walls on either side of the entrance door serve as a perch for visitors and spectators. Rest of the sides are covered using woven coconut leaves. Such a kalari is also called Kuzhi kalari [pit arena]. There are two reasons for preferring this substructure: one, it ensures cooling of the body as the students engage themselves in the gruelling, heat-generating exercises; two, it lessens the threat of skin infection from bites of insects that inhabit the top soil. The Kalari's where full fledged duels are held are larger.They are usually 64 feet longand 32 feet broad. During training, the pupils make their moves according to the commands came forth by the gurukkal. These oral commands, called vaaythaari, are a set of technical words or phrases which do not convey much to the ordinary people and the uninitiated. The difficulty in deciphering the meanings of these terms has even led to differences in practice. The problem is compounded by the fact that giving a sufficiently vivid paraphrase of complicated vaaythaaris is an impossible task. Suffice it to say that vaaythaaris are best understood only through the medium of demonstration and by training under a master, and the beauty of the corresponding movements can be brought to full fruition only with long years of constant practice. In olden times, Kalaripayattu practice would take place only for three or four months of the monsoon season every year. A small, upwardly tapering, seven-tiered structure (some kalaris prefer to have five tiers and others, nine) stands at the south-western corner of the training kalari. This is known as Poothara. Symbolically, it is said to represent the seven chakras or wheels of power embedded in the subtle body of humans. A conical mound of compacted clay is placed on the topmost step. This entire structure is the Poothara or altar at which Goddess Bhadrakali, the patron deity, is worshipped with offerings of flowers. It is not unusual for other gods too – Shiva, Parvathy, Ganapathy, Ayyappa or even serpent deities – to be worshipped.  There are kalaris that do away with the Poothara completely. There is another elevated spot in the kalari, between the Poothara and the western pillar, called the Guruthara where the ancient, nameless masters of Kalaripayattu are worshipped. The weapons used during the exercises are placed in the vacant space between the Poothara and the western main pillar. 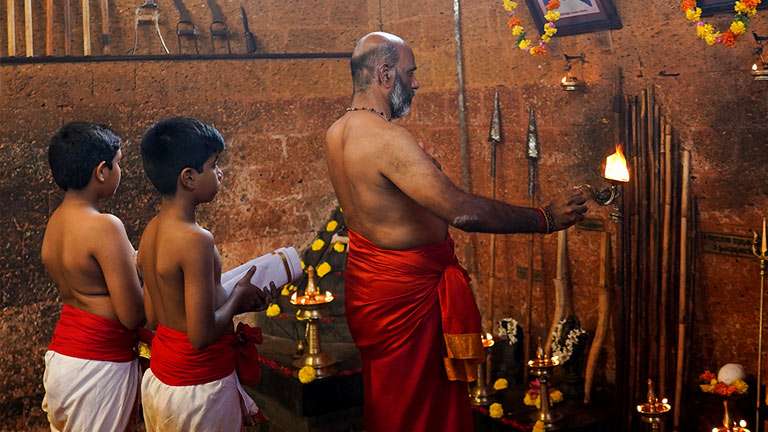 Children at a very young age, usually when they turn seven or thereabouts, are initiated into Kalaripayattu. Beginning this early gives them the advantage of lending their supple bodies to the long hours as well as the demanding rigour of daily exercises and training, without suffering too much strain. But there are exceptional individuals who despite taking to Kalaripayattu rather late in life – in their mid – or late twenties – have proven their worth and become acclaimed combatants and gurus. Astrologers are consulted and an auspicious day is selected for the initiation ceremony. Sometimes, parents simply prefer to formally introduce their wards to Kalaripayattu when the programme begins at the centre. On the designated day, the kalari is decorated with festoons of tender coconut leaves; and the Poothara and the Guruthara with flowers. Plantain trunks laden with fruits are erected on both sides of the entrance. A naazhi or nira naazhi [traditional measure] filled with rice grains are placed on a small banana leaf. It is customary to place other puja items too besides it – betel leaves and arecanut on one sliver of banana leaf; beaten rice, puffed rice, plantains, jaggery, raisins and tender coconut in another; holy ash and sandal paste in yet another. A kindi [spouted jug] holding consecrated water is also placed close by. Camphor, sandal sticks and other incense sticks are lit to spread fragrance all around. The gurukkal, as the master of the kalari is called, enters the arena placing his right foot first and bending to touch the floor with reverence. The traditional lamp holding five wicks is lit, prayers [usually Namah Shivaya – the panchaakshari mantra] are sung, and flowers [usually a sprig of holy basil, hibiscus and thumba (Leucas aspera)] are used to inscribe “Ohm” before being placed reverentially at the Poothara and the Guruthara to invoke blessings of the divine power and the first masters. The pupils step into the kalari placing their right foot first, fall at the guru’s feet, pay him their dakshina (chiefly, money, mundu, kacha, betel leaves, arecanut) and seek his benediction. Dressed in a tight loincloth called the arakacha or langoti, and after a massage using medicated oil, they are ready for the training. Rituals and elaborate pujas also mark the progression of each student from one phase of training to another, and on the days of the Navaratri [nine nights] festival. Rituals, though less elaborate, mark the beginning and end of training every day. The pupil enters the kalari, taking care to place his right foot inside first, walks up to the Poothara and pays respect by touching the step at the bottom with his right hand and brushing his fingers on his forehead and the chest. As his expertise in Kalaripayattu grows, he conducts this ritual through a series of specific moves, turns and delicately orchestrated leaps. Then he proceeds to briefly pray at the Guruthara. At the end of the day’s classes, he pays obeisance once again, stepping back even as he faces the Poothara. The floor is swept clean after the day’s training not only as a mark of discipline but also as a sign of respect towards the gods who preside over the kalari. After the students leave, the gurukkal squats at a point midway between the Poothara and the Guruthara, facing them, uses a short stick called muchaanvadi, inscribes “Ohm Shri Gurave Namah” while reciting a prayer silently. Thereafter, using the pointed end of the stick, he gently strikes the floor in front of the Guruthara three times. Maintaining contact with the ground with the same end, he retraces his steps without turning his back on the altars, and takes the eastern door out. Just before exiting, he throws the muchaanvadi inside the kalari. No one enters it until the next morning. The aim of Kalaripayattu is to develop in the pupil an extraordinary level of awareness of the environment as well as super-sensitive body-mind co-ordination that will keep him/her ever-prepared for adi [attack] and thada [defence]. It takes at least five years for a person to master all the techniques of Kalaripayattu. Throughout the training period, the pupils are expected to strictly follow brahmacharya [sexual abstinence]. As Kalaripayattu evolved in various parts of Kerala over the centuries, differences in practices crystallized to such an extent as to create two distinct styles within the state of its birth – the Northern (Vadakkan Kalari) and the Southern (Thekkan Kalari). (Some opine that a mid-Kerala style also exists.) Kalaripayattu as practised in southern Kerala traces its lineage to Sage Agastya. It depends on Siddha medicine for treatments and cures, and not Ayurvedic medicine patronized in northern Kerala. Another visible difference is that while the northern school imparts training in enclosed kalaris created below ground level, the southern school conducts lessons on open spaces or inside thatched structures constructed on the ground. Notwithstanding these differences, a comprehensive training in Kalaripayattu includes teaching the techniques of attack and defence using weapons like stick, lance, spear, knife, dagger, sword and shield, and also using the body itself as a weapon; imparting knowledge about the marmas [vital parts of the human body] attacking or defending which is often known to clinch a duel; giving lessons in medical treatment and massage in order to cure bruises, cuts, dislocations, breakage of bones and so on; instructing them on the different techniques of breathing and meditation, etc. Uzhichil or Thirummal or massage, like regular exercise, is a significant aspect of the preparations required for Kalaripayattu. Traditionally, uzhichil used to be done only in the Malayalam months of Edavam [May-June] and Karkitakam [July-August]. It is usually conducted on the southern part of the kalari, about eight feet from the Poothara, with the students facing the east. There are two types of massage: one in which the pupil is made to lie in a trough filled with oil called dhaarathoni and massaged, and the other where the pupil lies on a mat on the floor and the gurukkal, holding two suspended ropes very tightly with both hands, massages the pupil using his soles and toes. Only a master who has sound knowledge of the marmas is supposed to undertake this extremely risky procedure. The medicated oil combats the heat generated by the body during and after the training. It is also an effective remedy for bruises and fatigue. Elaborate exercises have been devised to develop the muscles of various parts of the body so that all the limbs become supple, the student acquires a flexible and strong physique, gains stamina, and develops powers of sustained concentration. There are separate sequences of exercises for the legs, hips, torso, and arms, and even for the eyes so that they remain focused, and help the rest of the body stay vigilant all the time.