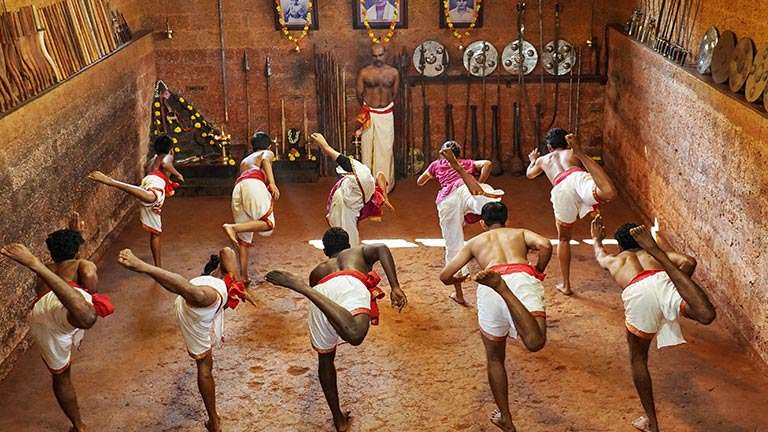 The aim of Kalaripayattu is to develop in the pupil an extraordinary level of awareness of the environment as well as super-sensitive body-mind co-ordination that will keep him/her ever-prepared for adi [attack] and thada [defence]. It takes at least five years for a person to master all the techniques of Kalaripayattu. Throughout the training period, the pupils are expected to strictly follow brahmacharya [sexual abstinence].

As Kalaripayattu evolved in various parts of Kerala over the centuries, differences in practices crystallized to such an extent as to create two distinct styles within the state of its birth – the Northern (Vadakkan Kalari) and the Southern (Thekkan Kalari). (Some opine that a mid-Kerala style also exists.) Kalaripayattu as practised in southern Kerala traces its lineage to Sage Agastya. It depends on Siddha medicine for treatments and cures, and not Ayurvedic medicine patronized in northern Kerala. Another visible difference is that while the northern school imparts training in enclosed kalaris created below ground level, the southern school conducts lessons on open spaces or inside thatched structures constructed on the ground.

Notwithstanding these differences, a comprehensive training in Kalaripayattu includes teaching the techniques of attack and defence using weapons like stick, lance, spear, knife, dagger, sword and shield, and also using the body itself as a weapon; imparting knowledge about the marmas [vital parts of the human body] attacking or defending which is often known to clinch a duel; giving lessons in medical treatment and massage in order to cure bruises, cuts, dislocations, breakage of bones and so on; instructing them on the different techniques of breathing and meditation, etc.