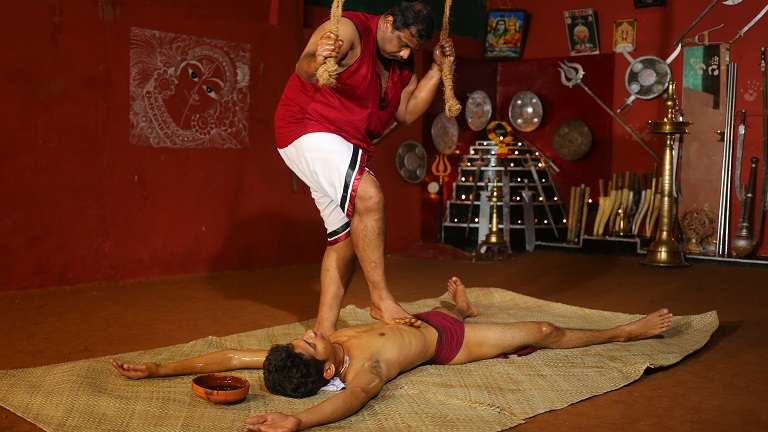 Uzhichil or Thirummal or massage, like regular exercise, is a significant aspect of the preparations required for Kalaripayattu. Traditionally, uzhichil used to be done only in the Malayalam months of Edavam [May-June] and Karkitakam [July-August]. It is usually conducted on the southern part of the kalari, about eight feet from the Poothara, with the students facing the east. There are two types of massage: one in which the pupil is made to lie in a trough filled with oil called dhaarathoni and massaged, and the other where the pupil lies on a mat on the floor and the gurukkal, holding two suspended ropes very tightly with both hands, massages the pupil using his soles and toes. Only a master who has sound knowledge of the marmas is supposed to undertake this extremely risky procedure. The medicated oil combats the heat generated by the body during and after the training. It is also an effective remedy for bruises and fatigue.

Elaborate exercises have been devised to develop the muscles of various parts of the body so that all the limbs become supple, the student acquires a flexible and strong physique, gains stamina, and develops powers of sustained concentration. There are separate sequences of exercises for the legs, hips, torso, and arms, and even for the eyes so that they remain focused, and help the rest of the body stay vigilant all the time.