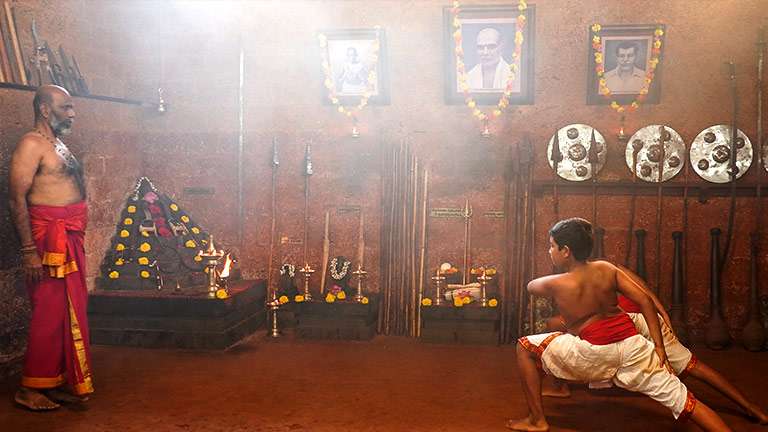 The gurukkal, as the master of the kalari is called, enters the arena placing his right foot first and bending to touch the floor with reverence. The traditional lamp holding five wicks is lit, prayers [usually Namah Shivaya – the panchaakshari mantra] are sung, and flowers [usually a sprig of holy basil, hibiscus and thumba (Leucas aspera)] are used to inscribe “Ohm” before being placed reverentially at the Poothara and the Guruthara to invoke blessings of the divine power and the first masters. The pupils step into the kalari placing their right foot first, fall at the guru’s feet, pay him their dakshina (chiefly, money, mundu, kacha, betel leaves, arecanut) and seek his benediction. Dressed in a tight loincloth called the arakacha or langoti, and after a massage using medicated oil, they are ready for the training. Rituals and elaborate pujas also mark the progression of each student from one phase of training to another, and on the days of the Navaratri [nine nights] festival.

Rituals, though less elaborate, mark the beginning and end of training every day. The pupil enters the kalari, taking care to place his right foot inside first, walks up to the Poothara and pays respect by touching the step at the bottom with his right hand and brushing his fingers on his forehead and the chest. As his expertise in Kalaripayattu grows, he conducts this ritual through a series of specific moves, turns and delicately orchestrated leaps. Then he proceeds to briefly pray at the Guruthara. At the end of the day’s classes, he pays obeisance once again, stepping back even as he faces the Poothara.

The floor is swept clean after the day’s training not only as a mark of discipline but also as a sign of respect towards the gods who preside over the kalari. After the students leave, the gurukkal squats at a point midway between the Poothara and the Guruthara, facing them, uses a short stick called muchaanvadi, inscribes “Ohm Shri Gurave Namah” while reciting a prayer silently. Thereafter, using the pointed end of the stick, he gently strikes the floor in front of the Guruthara three times. Maintaining contact with the ground with the same end, he retraces his steps without turning his back on the altars, and takes the eastern door out. Just before exiting, he throws the muchaanvadi inside the kalari. No one enters it until the next morning.