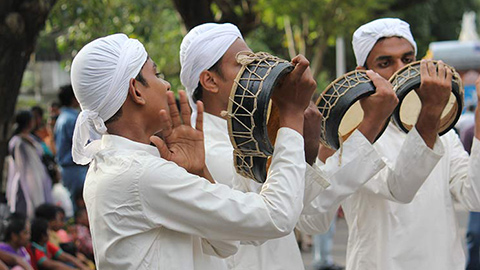 Duffmuttu is an art form prevalent among the Muslims of the Malabar region in Kerala. The art form gets its name from 'Duffu', also known as ‘Thappitta’, which is used as a percussion instrument for the performance. The performance usually consists of six or more performers with one singer who leads the others as they join in with a chorus. The performers will be seen moving in circles to the rhythm of the song while simultaneously beating the duffu. The performance advances in great spirits as the performers dance synchronously with extraordinary grace and flow. There will be a quick switching of the duffu among the performers in between, all of which syncs rightly with the rhythm of the song. The songs sung are usually a tribute to the martyrs and heroes. Another closely related art form which is similar to Duffumuttu is the Aravana muttu or Arabana muttu that uses a percussion instrument called Arabana.