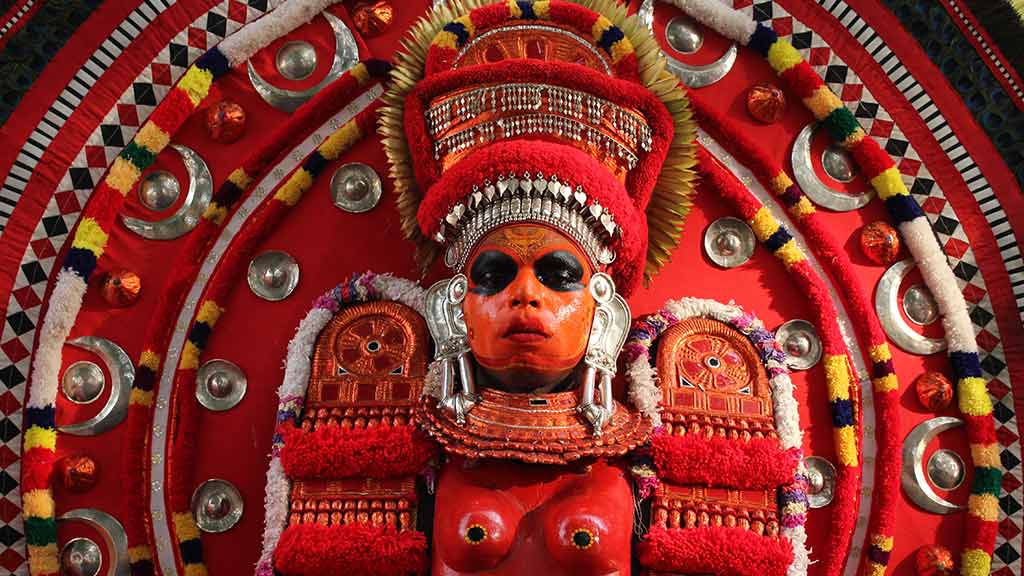 Theyyam is a ritual folk art form performed in North Kerala since ancient times. It is also known by the name Kaliyattam in some areas. The performance is known as Theyyattam and the elaborate costume is called Theyyakolam. There are over 400 theyyams performed in their own style and music. Some of the prominent ones are Raktha Chamundi, Kari Chamundi, Muchilottu Bhagavathi,Wayanad Kulaven, Gulikan and Pottan.  It is a ritualistic performance that combines elements of dance, mime and music. Performances are never conducted on stage but mostly before the village shrines or as ancestor worship in joint-family houses. It honours the beliefs of ancient tribals on worshipping heroes and the spirits of their ancestors. The heavy and elaborate makeup is distinct for each Theyyam. The face painting might take 8 to 10 hours for certain forms as per the traditional rules. The costumes include headgear, ornaments and detailed make-up and the performer dances to the beat of folk instruments like chenda and elathalam, all of which produces a supernatural effect. The duration depends on the significance of the deity being performed and the hierarchy of the shrine and might extend to 12 to 24 hours. Every performance is filled with such energy and grace that the whole premise would seem caught under its spell. The Theyyam season is usually from November to May and begins in Kasaragod and extends to the neighbouring district of Kannur.