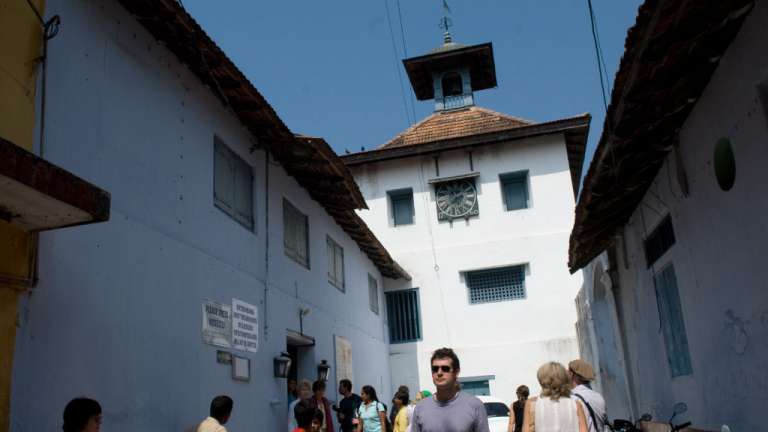 Today, the Paradesi Synagogue is the only active synagogue in Kerala in which prayers are conducted by the Jewish community. Tourists can visit this Jewish heritage monument on payment of a small fee.  the Paradesi Synagogue is unique for various reasons, the most significant of them being an old and precious object it has in its possession – the 10th-century copper plate that served as an official document granting Anjuvannam to the Jews and was handed over to the grand patriarch Joseph Rabban.  From the aesthetic point of view, the Paradesi Synagogue is striking for its brass-railed pulpit, its Belgian glass chandeliers belonging to early 20th century, and its clock tower. The tower itself is a marvel – a 45-foot tall structure dating back to 1761– each of whose four faces is inscribed with numerals from different languages, Arabic, Hebrew, Roman, and Malayalam. It was restored by the World Monuments Fund (WMF) in 2006 along with a brass bell which was re-mounted.  A stone salvaged from the Kochangadi Synagogue (said to be the oldest synagogue in Cochin which was completely destroyed by the invading Mysore army in the late 1700s) with the year of its establishment (1344) inscribed on it is currently displayed on the outer wall of the Paradesi Synagogue.  It also contains an ornate oriental rug that was gifted to the synagogue by Hailie Selassie, the last emperor of Ethiopia. While all these features tend to overwhelm even the modern tourist or visitor with a sense of awe, another aspect of the synagogue is most likely to tickle the funny bone.

The floor tiles of the sanctuary are truly unique in that they were imported from China in 1762.  As each of the porcelain tiles was hand-crafted, it is different from the rest.  The story of how they came to be laid at the synagogue speaks as much for the religious piety of the Jews of that time as their slyness and aesthetic sense.  Originally, they had been ordered by the King of Cochin for the purpose of decorating one of the temples in his land.  But their beauty so mesmerized the Jews that a plan was hatched to take possession of them.  The king was led to believe that one of the ingredients that went into the making of these exquisite pieces of ceramic tile was an unholy one – the blood of cows.  The king was so disgusted that he immediately abandoned the project.  Perhaps he was even thankful to the Jews for their timely intervention. Their revelation had prevented a shrine commissioned by him from being desecrated!