The early Christians did not completely relinquish the Hindu culture and the customs and conventions they were used to. One could see a close resemblance between the Hindu and Christian ways when it comes to ceremonies related to birth, horoscope, naming, initiation into the world of letters, marriage, death, funeral rites and such others. Before the advent of the Portuguese, Christianity was adopted only by the creamy layer of the society.

The celebrations in churches in honour of Saints and the festivals celebrated in the temples, had many similarities. Offertory, processions carrying idols, receiving a share of what has been offered to the Gods, giving offerings in return for a gift, cannon shots, ornamental parasols, incense burner, feasts, etc. were common to both temples and churches. Foreigners found it difficult to distinguish between churches and temples because of such similarities. This similarity extended to the music of the five traditional instruments, parading of elephants, ensemble of drums, music and dance recitals, religious discourses, fireworks, etc.

Birth:
During the last century, astrologers used to prepare the horoscope of a child soon after its birth. Though written as a prophecy of the child’s future, based on the positions of the sun, moon, and the nine planets, the logic behind the preparation of the horoscope was that it would serve as a register for recording the date of birth.  Now Christians have given up this practice.

Syrian Christians followed the Hindu custom of giving a newborn a mixture of gold, honey, and Vayambu, a medicinal wood, ground together. The Christians of Thiruvamcode still follow this custom. There was a system of celebrating the 28th day after birth by tying a black thread around the baby’s waist- Noolukettu - followed by giving gold and silver ornaments.

Syrian names have over the time undergone changes in such a way that it has become difficult to relate the two versions. For example, Peter has changed to Punnan, Joshua, to Koshy, Paul to Pylee, Zachariah to Tharian, Alexander to Chandy, John to Ulahannan etc.  Father’s name is added to the female child’s name at the time of baptism and husband’s name would replace it after marriage.

Baptism:
Baptism is the solemn religious ceremony of purifying the newborn by sprinkling holy water, within eight days after birth. If the head of the family fails to take the child to the church for baptism, the vicar should initiate punitive measures against him. If any child dies without baptism due to the lapse of a priest, he would be barred from performing his religious duties for six months. 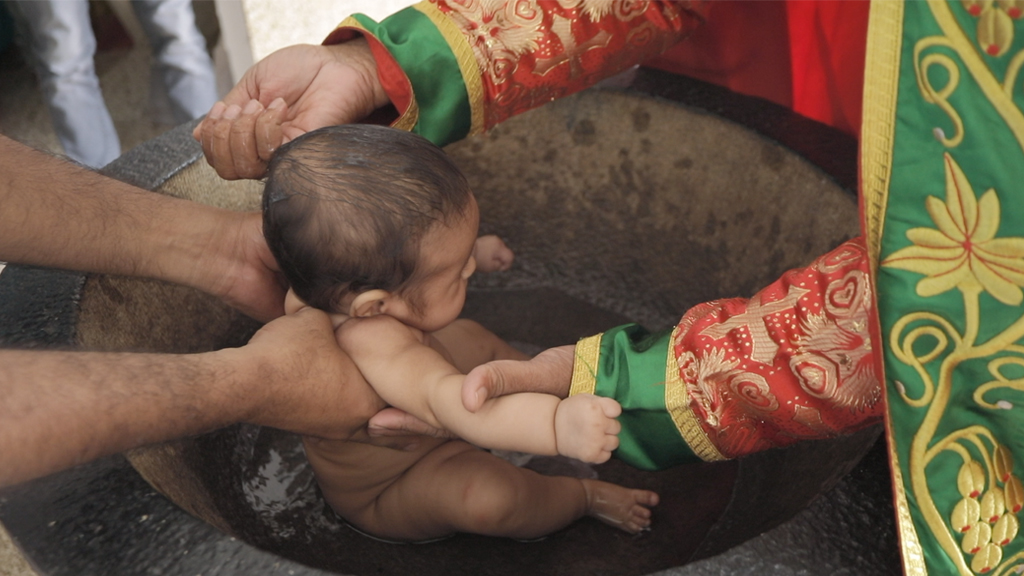 Paremakkal Governador’s, Varthamana Pusthakam prescribes as follows, "The child is taken to the church for baptism by the parents.  He is laid in a stone bucket and the priest would either pour water over him or dip him in water. Holy oil (Saith) is applied on the forehead, ears, and limbs before baptism. That this is a rebirth, is emphasised. Water purifies the sins acquired through birth.  This is a reminder of the baptising of Christ by John the Baptist."

Vidyarambham or Initiation to the world of letters:
Recently this ceremony is being done in association with churches.  Kalaris in Kerala had the system of initiating children into the world of letters by making them write ‘Thampuran Thunai’, which means ‘May God help me,’ in rice. Along with the alphabets, the basics of the martial art, kalaripayattu, were also taught in the kalaris run by the families of Panickers. Such families still exist in Paravur, Kura, Muvattupuzha, Kadamattom, Kothamangalam and Kalloopara. Both Christian and Hindu students were trained at such kalaris. The Christian Panickers had rights and powers in nearby temples (Mathew, Daniel, Kerala Christava Samskaram). On the occasion when the student’s competency in writing and reading has formally tested the teacher is offered rice, money, tobacco, betel leaves, and areca nut, in addition to refreshments for all present. This system of teaching poetry, grammar, and Syrian prayers came to an end with the establishment of schools.  Today kindergartens have taken over that role. The system of establishing schools connected with churches came into vogue during the 17th century.  There are records showing that Fr. Chavara Kuriakose had sent a circular to all dioceses citing the need for setting up schools.