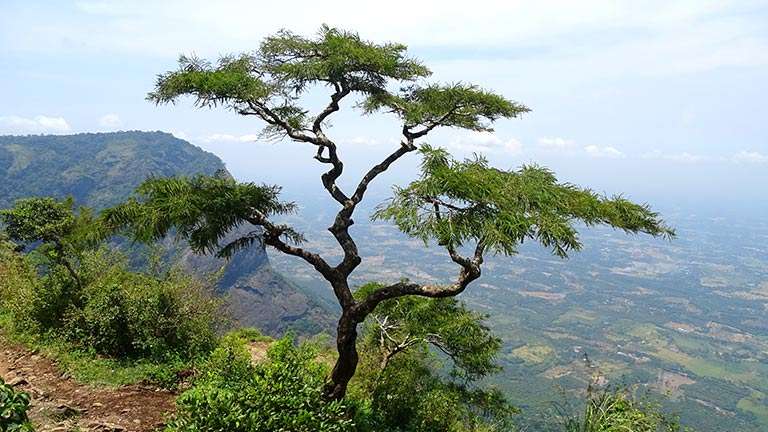 Hill stations are often sought as a place of solace, as much for their salubrious climate as for their picture-postcard views and eye-soothing lush green landscapes. Nelliyampathy, a hill station in Palakkad, offers all these, besides being home to orange, cardamom, coffee and tea plantations that cover the landscape.

Nelliyampathy is believed to have derived its name from the gooseberry trees (nelli in Malayalam) that are found abundantly in this area. Another version is that the place owes its name to the Kadar tribes who lived in a hamlet (pathy) near Nellikulam.

Nelliyampathy, lying adjacent to Parambikulam Wildlife Sanctuary, comes under the Nemmara Forest division and forms the southern boundary of the Palakkad gap that facilitates communication between Kerala and Tamil Nadu.

The undulating hills of the Western Ghats vary in height, ranging from 467 m to 1585 m above sea level, and are occasionally caressed by the clouds. Dark, evergreen and semi-evergreen forests, teeming with rare flora and fauna, separate these hill chains. The highest peak here is Nellikotta or Padagiri.

The winding road uphill Nelliyampathy promises alluring sights to a visitor. The hairpin bends offer breathtaking scenery, as either side of the road is wrapped in verdure. As the mists lift at the crack of dawn, the mountains reveal an unearthly beauty. Various vantage points en route offer panoramic views of paddy fields stretching endlessly across Palakkad, the adjoining villages of Tamil Nadu and also the Palakkad gap.

The 30-40 km wide Palakkad gap, the lowest pass through the Western Ghats, is also the only break in the stretch of mountains that runs along the entire eastern edge of Kerala. It acts as a corridor between the states of Kerala and Tamil Nadu.

Everyone who passes along the winding roads between the scenic tea, coffee and cardamom plantations is treated to refreshing aromas, along with the gushing sounds of waterfalls heard afar or near.

For the adventure traveller in you, Nelliyampathy offers many trekking options from Pothundy to Kalchady, with hilltops that stretch to anywhere between 8 and 15 kms. Some of the destination ranges include Kesavanpara, Ranimedu and Cheriyanpara, not to mention the steep climb from Kollengode to the top of Seetharkundu that promises an exhilarating experience.

Indian Gaur, Giant Squirrel and endangered species like the Nilgiri Tahr and Lion-tailed Macaque are some of the wildlife that tourists can expect to encounter in such treks.