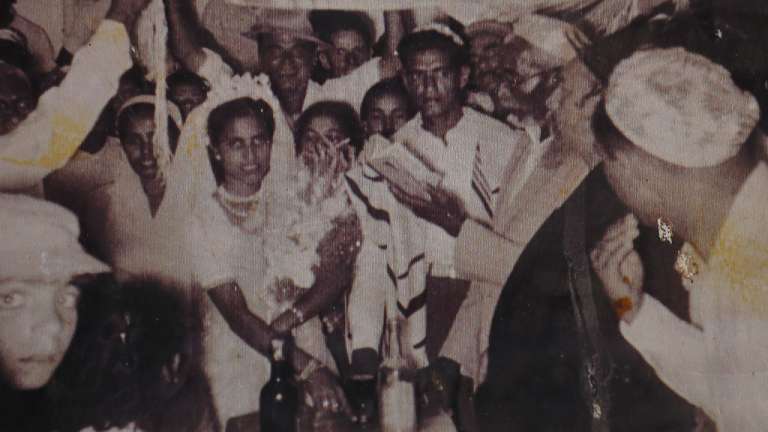 The wedding usually takes place a full year after a betrothal and is sealed as a legal contract and a divine act. As per the most ancient custom, in times when it was customary for the man to provide a home for his bride, the wedding ceremony took place under a canopy (that symbolized the home) called Huppah.  Gradually, it gave way to the Tallit, the prayer shawl of the Jews, draped over the heads of the couple.  Still later, the hood of the groom’s headgear was extended to cover his bride’s head too. The modern version of it is the white veil worn by the bride.

The couple also signs a ketubbah, or marriage contract which is read out loud to the congregation. Some of the handwritten ketubbahs belonging to the Cochin Jews, that are more than a hundred years old, are still preserved and on display at the Israeli Museum, Jerusalem.

In Kerala, old photographs of Jewish wedding ceremonies show young brides wearing pudava (ornate embroidered wrap skirt) and embroidered white blouse or the native costume of sari with a veil covering their heads.  In others, the wedding ceremony is seen conducted under a tasselled cloth canopy. The pudava cloth may later be used to drape a coffin and eventually sown into a parokhet (curtain hanging in the Holy Ark where the holy book of the Jews, the Torah, is placed). The grooms wore loose white trousers and knee-length white shirt along with embroidered sattriyah (vest with metal buttons) or kappa (buttonless long coat) and skull cap. Some wore Western suits instead. The Jewish custom of the groom adorning his bride’s little finger with a ring made out of the silver coins gifted by the groom’s father was retained (which would not be removed even upon her demise), and a local custom of the groom ties a thali (a tiny gold pendant worn as a symbol of a woman’s married status) adopted.

The latest Jewish wedding to take place in the state was in 2008 after a gap of nearly two decades. The ceremony was conducted in the Thekkumbhagam synagogue, Mattancherry.