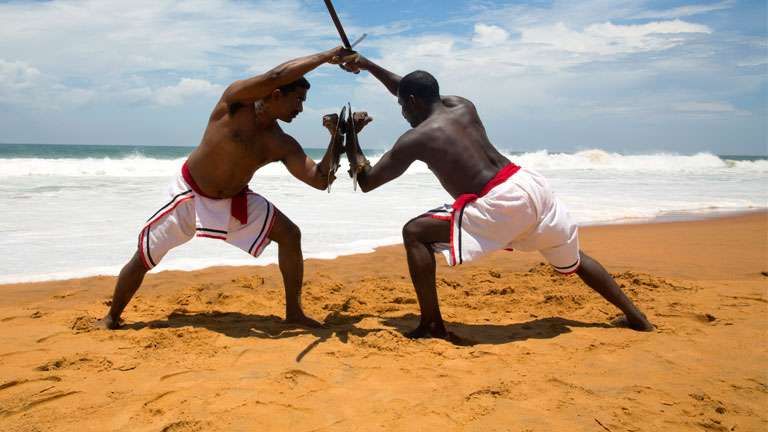 Kalaripayattu is a martial art form, one of the oldest in the world. It was practised when Kerala was rich in feudal principalities. In earlier times, the practitioners mainly belonged to the Nair and Ezhava castes, but through the years men and women from other castes have also started learning and practising this martial art.

The Kalaripayattu warriors of yore had amazing control over their bodies and were skilled in armed and unarmed combat as well as in traditional healthcare. They trained both their body and their mind to be in total harmony with each other. The exercises consist of a series of movements to improve agility, subtleness, balance and energy flow. Students learn to control their breath and their inner energy. It is said a well-trained Kalaripayattu warrior will be able to move as fluidly as water.

The master or teacher is known as gurukkal. All Kalaripayattu students have to go through rigorous physical training in order to master the skills of the art. Medicinal oil massage is an integral part of Kalaripayattu, and its system of treatment has close links with Ayurveda.

Some historians trace the history of Kalaripayattu to the 11th century when there was a major war between the Cholas and the Cheras. There are northern and southern styles in Kalaripayattu but the Kalaripayattu tradition of North Malabar is the most renowned one. There may not be many Keralites who have not heard the tales of the legendary Kalaripayattu warriors of North Malabar, like the intrepid Thacholi Othenan and the fearless and beautiful Unnniyarcha. Their feats of valour have been immortalised in Vadakkanpattukal or Northern ballads.

Other art forms have also adopted techniques of the Kalaripayattu. Ritualistic folk art forms including Velakali, Parichamuttukali, Sangakkali, Patayani and Mudiyettu which are popular in Kerala bear striking resemblances to the exercise of Kalaripayattu. The fame and influence of Kalaripayattu have crossed the boundaries of Kerala, and left an imprint on other martial arts like karate and Chinese boxing.

There are a number of training centres in the Malabar region which strive to preserve and pass on the rich tradition of Kalaripayattu to the next generation. The C.V.N. Kalari at Edakkad in Kozhikode district is one of them. There are many Kalaripayattu centres in Kannur district as well.