Remarkable tales of history have been spun from this tiny piece of land. Explore the historical sites in Muziris, which are the only tangible remnants left of a bygone era. 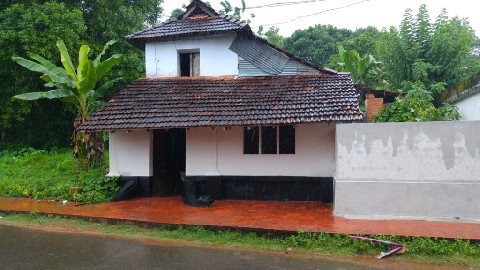 Jewish houses – A Tradition of its own
Before Israel was born, the Jew Street near the Paravur market and the Paravur Synagogue in Kerala was a vibrant and quaint place. The Jewish houses in this region typically had two identification marks that were hard to miss – the stone lamp in front of the house and the Mezuzah. The Mezuzah is a decorative metal or bamboo case fixed on the gates of Jewish houses.  Hebrew teachers used to write two lines from the Torah in a parchment, and this parchment was kept inside the Mezuzah. The Jews used to kiss the case whenever they left and returned to their houses.

Most of the Jewish houses were two-storeyed buildings with the entrances facing the street. In olden days the floors of the kitchen and the rooms were besmeared with a paste of cow dung.

The Muziris Heritage Project has initiated a move to restore and bring back the old charm of these houses as part of its Conservation programme. The two houses that remain in Jew Street will be converted into museums. The one at Chendamangalam will portray the lifestyle, culture and varied cuisines of the Jews, while the other at North Paravur will exhibit the history of the Jewish settlement, the trade and occupation in the region. 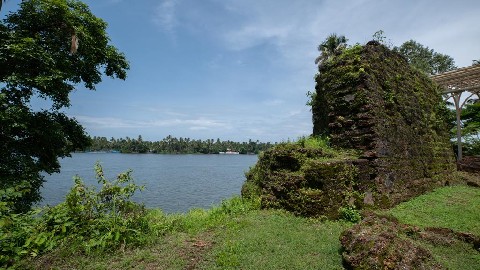 During ancient times, this fort was poised on a strategic place and helped control the movements of ships and boats to and from the Malabar.  But today it is in ruins. Built by the Portuguese in 1523 CE, the Kottapuram Fort, also known as Cranganore Fort or Kodungallur Fort, was located in the mouth of the Periyar.

In 1662 CE, the Dutch fleet attacked the fort but succeeded in capturing it only in 1663 CE. The attack caused much damage to the structure.  Eventually, the Dutch reduced its size and used it as a place to look after their trade ships. Later, Hyder Ali of Mysore tried to negotiate with the Dutch in a bid to purchase the fort. But during Tipu Sultan’s rule in Malabar, on 31 July 1789 CE, the then Maharajah of Travancore, Ramavarma Dharmaraja purchased this fort, considering its importance in safeguarding the land and kingdom. He also bought the Pallipuram Fort. The agreement was executed by Raja Kesava Dasa, the Dewan of Travancore, and John Gerard Van Angelbeck, the Dutch Governor. Later, in 1909 CE, the Travancore government decided to protect the site as public property and built a memorial stone inside the fort.

The fort is now in a shambles.  However, restoration work is underway, and the development of the fort, under the aegis of the Muziris Heritage Project, has facilitated excavations in the site. One can see the border stones of Travancore and Cochin kingdoms in the fort premises. 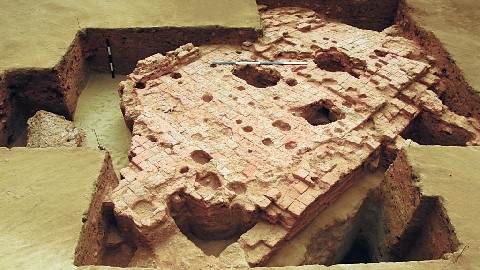 Until recently, Pattanam, an ancient town in Kerala located 30 kms north of Cochin in Ernakulam district, hid stories about its own majestic past.  In yester years, it was an early historic urban settlement and an important maritime trading hub. But these facts came to light only after the Pattanam excavations, the first-ever multi- and trans-disciplinary excavations in Kerala state, began.

Pattanam excavations which started in 2007 under the leadership of the Kerala Council of Historical Research (KCHR) have unearthed artefacts through eight seasons. Sixty-one trenches have been excavated so far, which contribute to around only one percent of the archaeological mound. Zoological evidence such as human bone fragments and teeth, immoveable elements including brick architecture, burnt clay floors, wharf with bollards and a canoe parallel to it, toilet features, ring wells, storage jar and a large volume of artefacts, potsherds, non-Indian pottery sherds, etc. were the major findings there.

The objects and the features from the archaeological mound point to a continuous settlement from 2nd century BCE to 10th century CE. The excavations also throw light on the maritime connections across the Indian Ocean, the Red Sea and the Mediterranean Sea. The finds and location also suggest the possibility of “Pattanam” being the ancient “Muziris” or “Muchiripattanam”. The artefacts and objects collected from the mounds are classified, documented and are now displayed in the site museum at Pattanam. 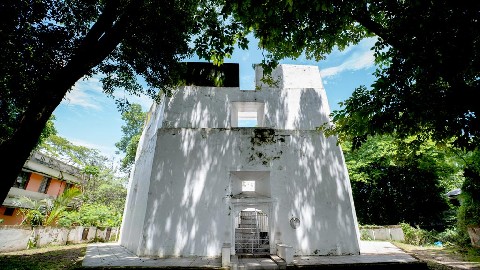 To the casual eye, it is just another building that has sadly gone to seed. The signboard however shocks us out of a dismissive attitude, and ignites our interest because it declares the historic importance of the  structure. Constructed by the Portuguese in 1503 CE, the Pallipuram Fort also known as Ayakotta or Alikotta, is India’s oldest existing European monument. Hexagonal in shape, this fort looks like a bastion, three storeys high. The lowest floor stands five feet above the ground and is connected through steps from the entrance gate. Just underneath this floor is a cellar which was used to store gun powder, back in that time. It is 4 feet tall and covers an area of 7 square feet. The fort is made up of laterite, mortar and wood.

Located near Vypin island, the strategic location of the fort attracted many rulers to capture it. Firstly, in 1663 CE, the fort was conquered by the Dutch. Although the Mysore rulers had a plan to purchase the monument, the whole proposal fell through due to interference from the English East India Company. Later in 1789 CE, the Travancore Maharaja acquired the fort along with the Kottapuram Fort. When the Mysore rulers stepped back, the English East India Company took control of the Malabar area and over the years, the Pallipuram Fort lost its significance. In 1909 CE, a memorial stone was laid in front of the fort and in 1964 CE, the fort was declared a protected monument. 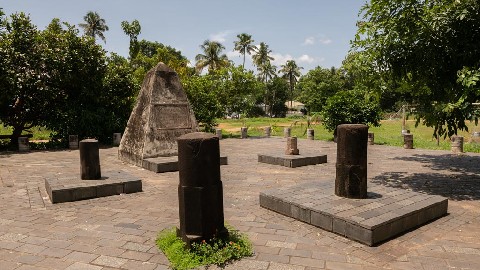 At a time when Kerala was ruled over by the Cheras, this region was their administrative headquarters.  It must have been a bustling centre, marked by royal grandeur and luxury on the one hand and power struggles  and trade negotiations on the other.  The Chera dynasty that ruled from the 9th to the 12th century had their capital at Mahodayapuram (modern Kodungallur).

Situated at Methala, 3 kms from Kodungallur, Cheraman Parambu stretches over an area of five acres. During some initial explorations, remnants of laterite stone foundations and walls were found. Therefore, in 1944 and 1945 CE, the Archaeology Department of Cochin, with support from the Archaeology Survey of India, undertook further excavations at a depth of 1.5 meters to unearth various kinds of potsherds, copper and iron implements, bangles, beads and small lead balls. It was noted that the potsherds belonged to a category called 'Celadon pottery', made in China and predominant during the Sung period between the 10th and 12th centuries. Beneath the occupation layers, there was loose sand.

Further excavations in the site conducted by the Archaeological Survey of India in 1960 CE could only find some Shiva lingas, which are exhibited in a portion of the plot. 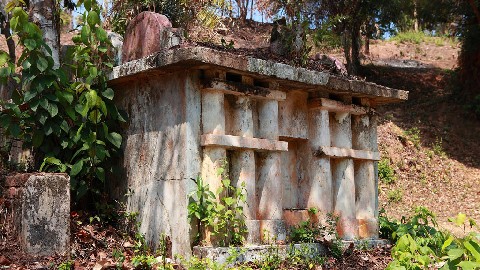 There are many synagogues and cemeteries in the Muziris region. Prominent among them is the Jewish cemetery near the Kottayil Kovilakam. For some time, after all the remaining Jews left for their homeland, Israel, their buildings remained neglected. Now, under the Muziris Heritage Project, each one is being conserved for the benefit of interested tourists and lovers of Kerala’s past heritage.  As a result, the cemetery is now a protected area. In the cemetery, there are Hebrew inscriptions on the tombstones, made of marble.

This region is known for its religious harmony. On different sides of the Kovilakam, stand a church, a temple, a synagogue and a mosque. It is a unique place in India, where four important religions (Christianity, Hinduism, Islam and Judaism) are practised within a few metres of one another.