Much has been said about the communal spirit of Muziris as it is home to many religious communities, all living in close proximity to each other. Some of the religious sites that find prominence in the Muziris map are listed below. 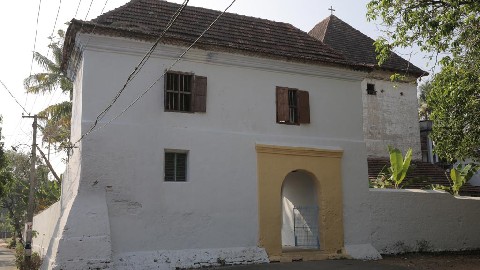 Situated at Chendamangalam in Ernakulam district, the Holy Cross Church established by Jesuit priests in 1577 CE is now a historical monument in the Muziris Heritage Project. A printing press and a seminary were also established by the Jesuit missionaries in this place. It is said that certain parts of the church building got destroyed during the time of Tipu’s invasion. The Vattezhuth [old Malayalam inscriptions] from the 16th century, found in front of the church wall are a witness to the old tradition and heritage it holds.

It is believed that Saint Francis Xavier, the great Christian missionary, lived in the old church building. While considering the history of church it is important to note that the architectural styles followed in Kerala churches in early period were similar to those of Hindu temples. It was the Portuguese who brought a change in the church architecture, along with the Latinization of the Kerala church. 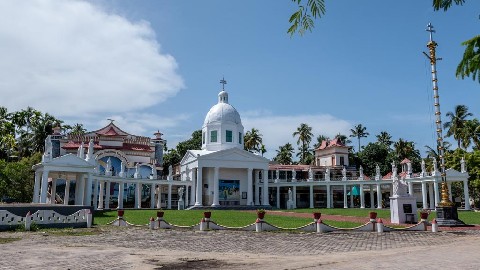 Marthoma Church, Azhikode also known as Marthoma Pontifical Shrine located 6 kms from Kodungallur, is a major pilgrim centre under the Muziris Heritage Project. St Thomas, the Apostle of Christ, arrived first in Kerala at Kodungallur on 21 November, 52 CE. Located on the banks of the Periyar, this coastal area had communities of Jews and Muslims. It is believed that St Thomas preached gospel here, baptised new believers of the locality, and established Christian communities. The Marthoma Church is believed to be the first of the seven churches St Thomas established in Kerala.  In 72 CE, St Thomas was martyred at Mylapore and later his relic was taken to Edessa and then to Ortona in Italy.

Although there are no remains of the old city and church here, in 1954 CE a relic of the bone of St Thomas’s right arm was bought from Ortona, and kept in a beautiful shrine behind the altar of the church. This shrine is built in the model of St Peter’s Basilica in the Vatican, and attracts thousands of people irrespective of differences in religion, caste or creed.

The Marthoma Smrithi Tharangam (a Sanskrit word meaning “waves of memory about St Thomas”) offers a quick view of the mission of the Apostle. This 35-minute long audio-visual presentation depicts the life of St Thomas, his journey from Palestine, arrival at Cranganore or Kodungallur, his apostolic mission in India, death at Mylapore, and finally the bringing of the relic to Kodungallur. 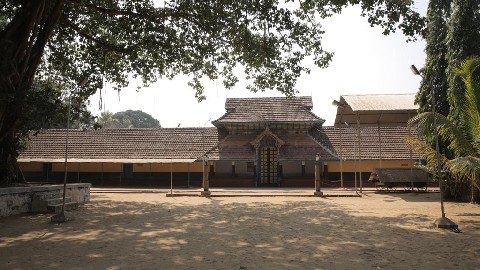 Gowda Saraswat Brahmins settled in Vypin around 16th century CE, and built many temples in and around Azheekkal, one of the major temples being Sree Varaha temple. After suffering major erosions from flood, the temple at Azheekkal was dismantled and brought to Pallipuram near Cherai, where a new temple was built and prathista [idol installation] was done in 1880 CE.

The famous temple ratham [chariot] and rathaveedhi [chariot’s street] are notable features of the temple architecture. The temple has a vast ground in front which is a rarity among other GSB temples in Kerala. The seevelipura [roofed pathway] is another architectural speciality of the temple. 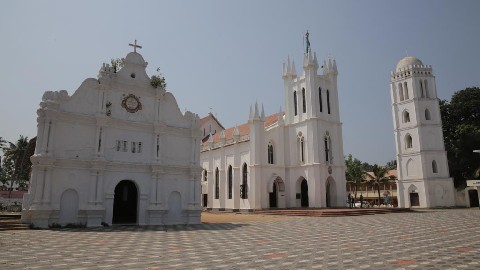 Manjumatha Church, is one among the three famous pilgrim centres in South India dedicated to Our Lady, Virgin Mary. The church was built by the Portuguese, during the same time that the Pallippuram Fort was built. Tipu Sultan’s invasion in 1789 CE targeted many churches and temples. Anticipating this situation, the believers closed themselves up in the church and prayed. It is believed that when Tipu’s army reached the place, they could not identify the church as it was covered in snow. Hence, the church got its name Manju Matha, that translates to “Our Lady of Snow”.

When the Dutch invaded the fort, they built another church adjacent to the present one. A new one was constructed in 1930 and renovated in 2006. The church is renamed the Basilica of Our Lady of Snow in 2012. The Church is located at Pallipuram near Cherai. 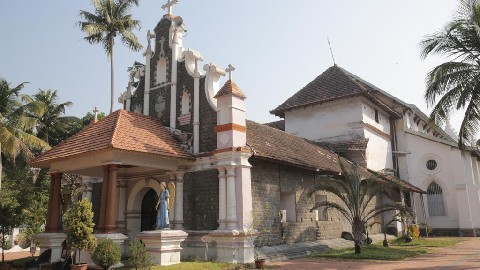 A major pilgrim centre in Ernakulam district, the Kottakkavu Church is one among the eight churches founded by St Thomas in 52 CE. The small chapel in front of the church preserves an ancient Persian Cross, engraved on granite stone and is believed to have been sculpted by Mar Sabore or Mar Prothe around 880 CE. St Thomas, during his apostolic mission, had founded Christian communities here, and is believed to have erected a wooden cross at the place of the old chapel. It remained standing until 18th century but was destroyed during the siege of Tipu Sultan.  The church was rebuilt and blessed in August 2002.

The giant elephantine wall (Aanavathil in Malayalam) on the western side of the church and the pond, in which the Apostle baptised the community, are still preserved. An early account states that the church donated two acres of land for the setting up of the Paravur market. It was the place where Cross stood from the ancient days that was converted to the market place. People from different walks of life and different diasporas visit this church and feel its spiritual power. 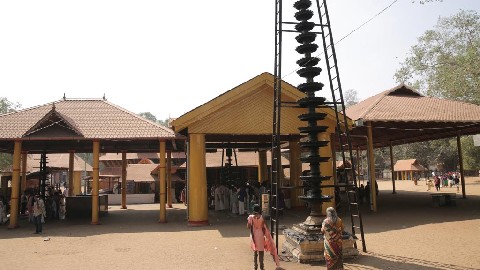 Kodungallur Bhagavathy Temple, also known as Kurumbakavu Bhagavathy Temple is a major shrine of Goddess Kali in Ernakulam district. Located 1.5 kms southeast of Kodungallur bus stand, this temple is renowned as one of the Shaktipeedhams [powerful seats] of the Goddess in Kerala. It is believed that the magnificent power of the temple is conceived in the five Chakras consecrated by Adi Shankaracharya. The devotees believe that the rituals are conducted under the instructions of the Goddess.

The temple is considered the second abode of Kannaki, an incarnation of Goddess Kali. It is supposed that the idol of Kannaki was discovered 1800 years back, by the Chera king, Cheran Chenkottuvan. The temple, situated in 10 acres of land, is built in typical Kerala architectural style and features many secret paths and chambers.

The temple enjoys an important place in the itinerary of devotees visiting Kerala, especially on Tuesdays, Fridays and during the Sabarimala season. Bharani utsavam or Kaavutheendal which starts on the Bharani asterism in the Malayalam month of Meenam [March-April] is the most famous festival celebrated at the temple. In olden times, the customary practice of animal sacrifices was part of the festival but later it was prohibited. But the devotees still sing lewd songs and drink liquor as they go from their village to the temple as part of an ancient, quaint and almost forgotten ceremony. 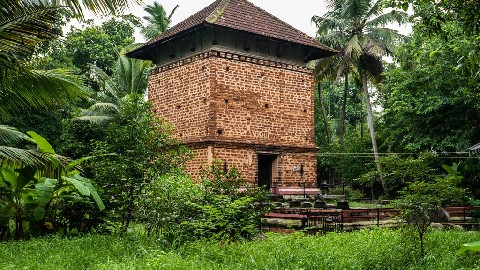 According to Keralolpathi (a Malayalam work that deals with the origin and history of Kerala), Kizhthali Siva Temple, one among the eighteen Thali temples dedicated to Lord Shiva in Kerala, had its origin during the reign of Perumal kingdom. The rulers of Chera dynasty, who were primarily Shaivites (believers of Lord Shiva), had Namboothiris as advisors and they established different Shiva temples, which came to be known as Melthali, Nediyathali and Chingapuram Thali.

But today, the original temple is in ruins. It was first destroyed by the Portuguese and then by the Dutch. But the worst kind of destruction happened after the siege of Tipu Sultan. What remains of the older temple is only the Garbagriha (sanctum sanctorum). The original temple was situated in a vast and wide area. The inner and outer walls of the temple along with the Koothu Parambu, Kalari Parambu and Kalapura Parambu were destroyed. The square Garbagriha, with a narrower Mukhmandapa and the Adhistana looks like a cubical tower.

The temple is situated in the Kodungallur-Paravur road and is administered by the Department of Archaeology, whereas the religious rites are performed under the leadership of a trust. 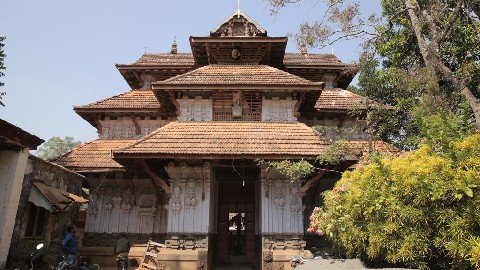 Thiruvanchikulam Mahadeva Temple, located at Kottapuram, 6 kms from Kodungallur, in Thrissur district, dates back to the 8th century.  It was built during the rule of the Chera dynasty. The presiding deity Lord Mahadeva was the family deity of the Cochin royal family.

Built in the Kerala architectural  style, the temple features a Namaskara Mandapam, a prayer hall with 16 pillars in front of the sanctum sanctorum. The temple has a good collection of mural paintings which depict many scenes from Hindu mythology. The temple is also known for its rituals. Palliyara Pooja performed by devotees for securing peaceful marital life and begetting children, attracts hundreds of people. These rites are performed on full moon nights, during evening time.

The annual festival of the temple takes place in the Malayalam month of Kumbham [February-March], when Shivarathri festival is celebrated with great pomp. Anayottam [elephant race] is conducted as part of the festival, and people throng to witness this celebration. Vaisakha Brahmotsavam is another prominent festival celebrated at the temple, and it usually falls in the Malayalam month of Midhunam [May-June].

The oldest mosque in India, Cheraman Juma Masjid at Kodungallur,  best exemplifies the Islamic tradition of India. It was founded by Malik Bin Dinar, Islamic propagator and follower, in  629 CE.

Established during the period of the Chera dynasty in Kerala, the legend behind the masjid is said to be as follows. A king of the Chera dynasty had a vision of the moon splitting into two. The Arab merchants who came to the Muziris Port explained the meaning of vision as a miracle performed by Prophet Mohammed. Hence, the king visited Mecca to meet the Prophet, embraced Islam and took on a new name. On his way back, he died at Salalah, Oman.  But he had given clear directions to his fellow travellers to visit his native place. Accordingly, Malik Bin Dinar, an early century Islamic propagator and traveller, visited Kodungallur and built this mosque in his name.

It is believed that the masjid was renovated in the 11th century and later in the 18th century. It maintained its original appearance until 1974 when it underwent further refurbishment.  The façade of the building was removed and a new building put up. However, as the inner parts, including the sanctum sanctorum, the wooden steps and the ceiling were left untouched, it retains the architectural grandeur of the past. One of the most attractive features of the masjid is an ancient oil lamp which devotees believe has been burning ever since its origin. People of all religions visit the mosque and soak themselves in its aura. 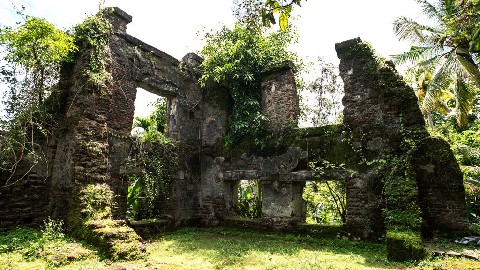 A visit to the remains of Vypeekotta Seminary takes you into a bygone age. Situated in Chendamangalam village in Ernakulam district this protected monument was part of a monastery established by Jesuit priests from Portugal. The seminary used to function as a college to teach priests the ceremonies and rituals associated with the Roman Catholic Church.

The monastery, also known as Chennattu Maha Vidyalayam, is supposed to have had the first-ever printing press in Kerala. It was almost destroyed in a war and all that remains now is a mere shell of the old building, protected under the State Archaeology Department. Besides, pottery excavated from this area have been transferred to the State Archaeology Museum in Thrissur. Stone inscriptions can be seen in the church compound wall. Visitors can also see remnants of three ancient caves.