Other Places to Visit

Apart from the historic and religious sites, there are still places that come under the Muziris Heritage Project that reflect the spirit of Muziris. Some of them are listed below. 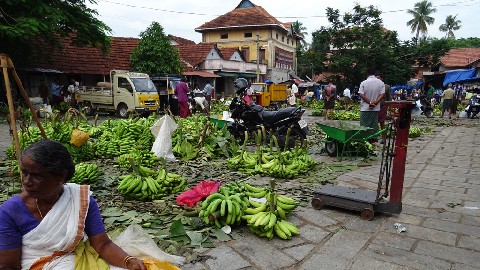 The Early Markets in Muziris

In the olden days, the people of Muziris cultivated what grew best in their habitats, and exchanged that for another. Paddy was given in exchange for items like fish and salt. It was imperative that they did this for their livelihood and thus sheer necessity prompted them to find a common and convenient place where they could barter goods. These places eventually grew busier and the early markets, including Kottappuram and Paravur, must have developed from here. Foreign trading vessels were greeted by an interesting cross-section of people for whom this trade held an important place in  their daily life.  These markets must have been an interesting space in those times, extremely variegated in character and bustling with activity. 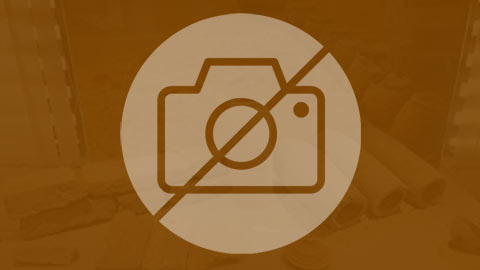 The Exchange Markets or Mattachantha

Chendamangalam and the Paliam Palace occupy important positions in the Muziris Heritage Project. At a time when coins with money value were yet to make their rounds, there functioned an exchange market at Chendamangalam in North Paravur. The market was resurrected in the village on 10 April 2013.

On the Paliam school ground, vendors gathered from different places to sell their wares. Things like pottery, mats, carpets, knives, toys, vegetables, fruits, fish, etc. were sold here. Earlier, these things used to arrive here through the waterways. Bartering system was practised and although the state of affairs has changed now, the market is still known as ‘exchange market’ or Mattachantha. 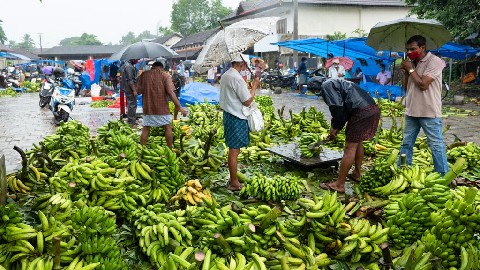 Located close to the Jewish Street and the synagogue in Paravur, the Paravur Market finds a place in Muziris Heritage Project. Tuesdays and Saturdays are important days here when this area witnesses an  unusual rush of sellers and buyers. On Sundays, the market remains closed. Although it looks like any other market in Kerala, what makes it different is the number of heritage buildings, which find their place amidst the new ones. The Muziris Project has tried to retain the existing market activities on the whole, while increasing some basic facilities in the market. It has further developed the boat jetty, as it is situated close to the backwaters. One can even find the vanchis (small boats) unloading the market supplies, a sight that you could have never seen in any other part of Kerala. 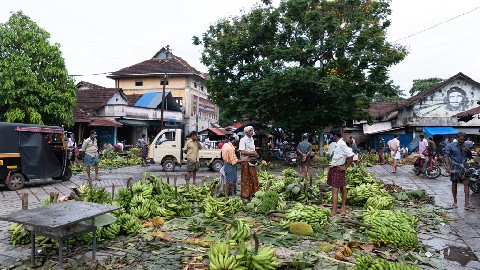 Kottapuram Market, a typical rural market in Kerala has a hidden past.  If you observe keenly you will see traces of an ancient market which bear the signatures of different foreign influences, particularly, the Dutch and the Portuguese. The old market has changed over the years, especially after an important facelift it got during recent years, and some of its past glory has been revived.

In ancient times, a lot of vendors from different places used to come to the market and sell their goods to the local people and others. Bullock carts and snake charmers bustled amidst the haggling people, and were a common scene back in that time. The Kottapuram market is located close to National Highway No.17 in Thrissur district.

Kothikallu or Kothi stones are centuries-old boulders scattered around the Muziris region, and are of compelling archaeological significance.

The stones were used to represent the border between the erstwhile Travancore and Cochin kingdoms. The two princely states remained independent under the British rule in 1947 and under the Union of India until 1949. In 1949, these states merged to form the State of Travancore-Cochin and on 1 November 1956, the state of Kerala formally came into existence.

These centuries-old stones have inscriptions on them – the Malayalam letter ‘ko’ on one side representing Kochi, and ‘thi’ on the other side which signifies Thiruvithamkur [Travancore]. It is believed that Kothikallu as they came to be known, or border stones, were placed to resolve the border issues among the neighbouring kingdoms, before independence. The stones were placed on both sides of the boundary, the boundaries being rivers, canals and roads. The area that lay between the stones was usually a ‘no man’s land’.

These stones are still found in the area that comes under the Muziris project. Although many stones were lost when various developmental projects were undertaken in the area, the Kottappuram Fort and the Sahodaran Ayyappan Museum in Cherai still preserve the stones intact in their complexes. 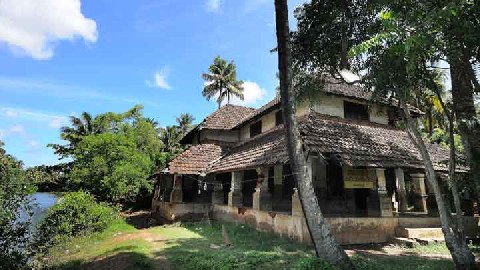 Earlier, trade in the Kodungallur region flourished through the waterways. Anappuzha, one such waterway in the village of Methala held a position of great significance. It  was the chief trade route between Cochin and Travancore and part of their common boundary. The Canal House at Thiruvanchikulam stands on the banks of the Anappuzha.

A toll collection centre was established at this Canal House by the Cochin government to regulate the trading boats plying the Anappuzha route. Dutch records mark a ‘Tol Hys’ in this area. But the present building, which has been taken over for conservation by the Muziris Heritage Project, does not indicate any signs of Dutch architecture, and was probably built by the kings of Cochin in the place of ‘Tol Hys’.

Near the Canal House is situated the ancient Thiruvanchikulam Siva temple which is believed to have been built in the 8th century. 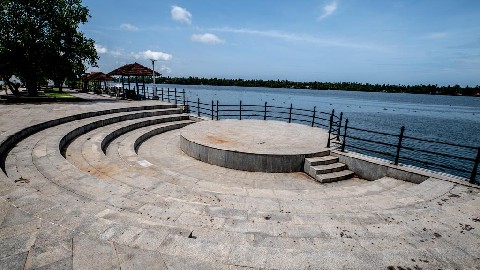 The waterfront or backwater stretch in Kottappuram, situated 5 kms from Kodungallur, lies close to the Kottappuram Fort. The Kottappuram market here functioned as a major trade centre during the earlier years.  It still carries the spirit of those forgotten years, which is evident when the market comes to life every Tuesday and Friday.

The waterfront developed here now serves as a recreation zone with a walkway, waterfront seating, kiosks, restaurants and an eat street nearby, that serves a wide range of Kerala delicacies. The walkway here can be reached through the Moothakunnam-Kottappuram bridge that connects it to the Valiya Panickan Thuruthu. There is also an amphitheatre close to the lake and as the place is lined with shady trees, it serves as an excellent venue for cultural events.

Another attraction is that it is from here that the Champions Boat League (CBL), Kerala Tourism’s initiative of a boat race patterned on a league format of cricket, is flagged off. 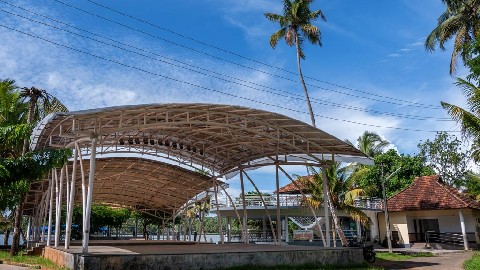 Gothuruthu, a small island near North Paravur of Ernakulam district, is the fount of Chavittu Natakam, an art form that evolved out of a combination of elements from the theatre performances of Kerala and Portugal. This five centuries-old Christian art form emerged in the recent years from the shadows of neglect and near oblivion, as the state government set up Kerala Chavittu Nataka Academy (KCNA) in 2005 at Gothuruthu.

Chavittu Natakam, literally meaning “stamping dance,” emphasizes rhythmic and exaggerated foot work. Traditionally, Chavittu Natakam was performed for 10-15 days to present a single story. Today, this art form is more refined than before, of shorter duration – reduced to fewer than three hours – and live music has given way to recorded music. The first and most popular play in this art form is Karalsman, written by Chinnathampi Annavi, which is based on the heroic deeds of the French emperor who defeated the Emperor of Jerusalem. Glittering outfits as well as vigorous and rhythmic moves performed by a large number of artistes make this performance a colourful visual spectacle.

At Gothuruthu, the performers are mainly from the fisherman community and other labouring classes. Nowadays, tourists are attracted to this unique and rare art form, which is performed on demand. For the people of Gothuruthu, Chavittu Natakam is not merely a means of livelihood, it is part of their lives. Gothuruthu is also famous for vallamkalli (boat race), generally conducted during September, and for its Portuguese-inspired cuisine which showcases more than a hundred varieties of seafood recipes. 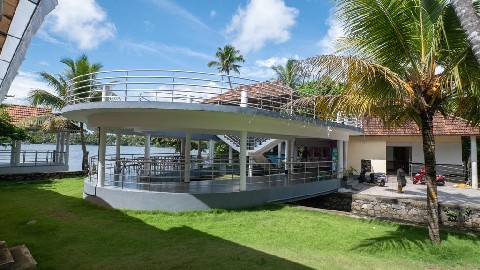 The Performance Centre and Restaurant is located at a corner of the Kottappuram waterfront in Kodungallur. The centre steeped in history is visited by local and international tourists alike. It has a restaurant, cafeteria and party hall with a seating capacity of 60, open from 12 noon to 10 pm on all days. The water-facing restaurant, which almost looks like a floating restaurant, provides an eco-friendly ambience, with open kitchens and delicious eateries. The cuisine is Portuguese-inspired with a variety of more than 100 sea-food delicacies.