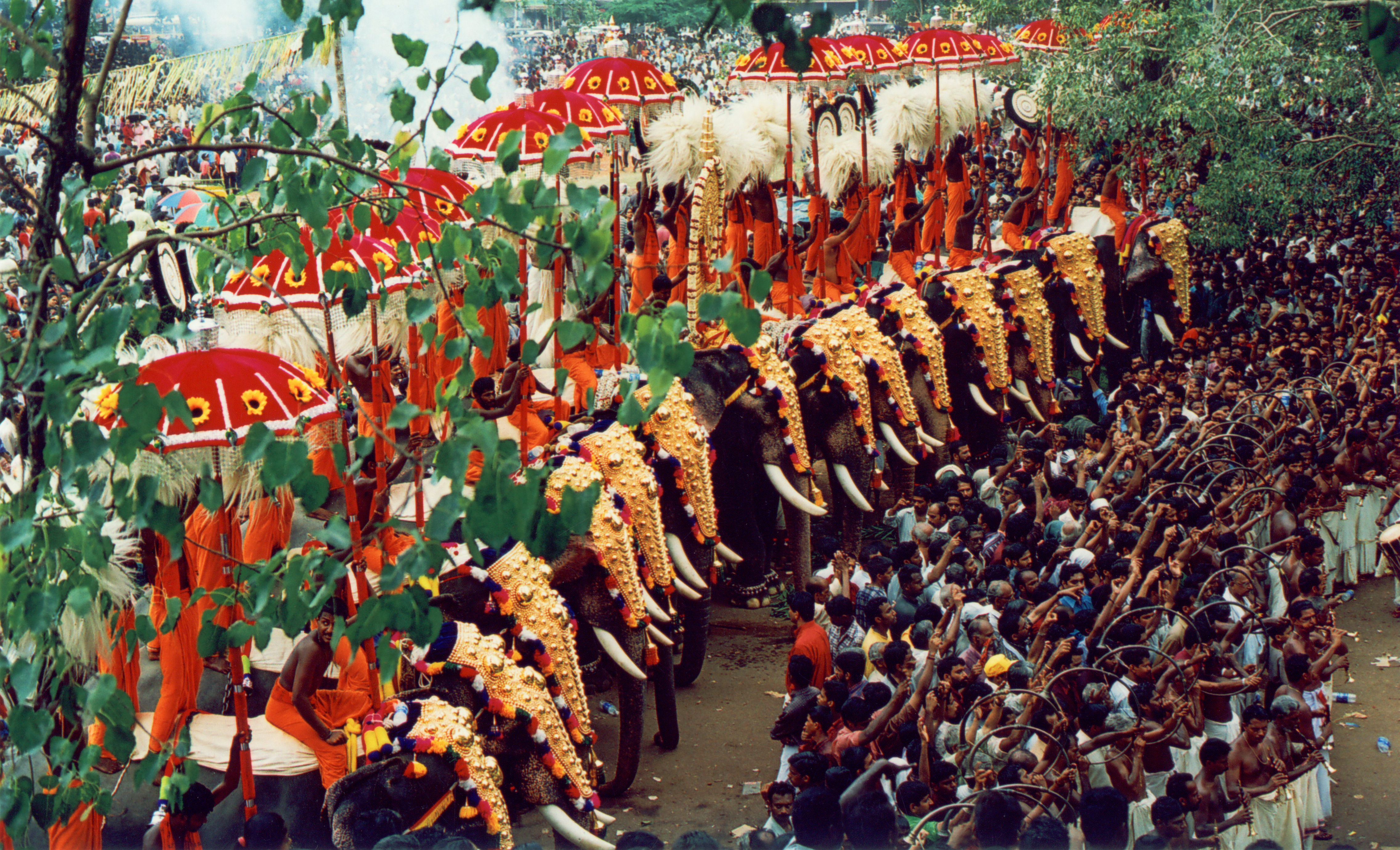 Thrissur Pooram, often termed as the festival of festivals in Kerala is held in Thrissur, a northern district of Kerala. The word pooram literally means group or meeting. The tradition has that every year the Gods and Goddesses residing at temples in the neighbouring regions come together for a day of celebration at the famous Vadakkumnatha Temple, dedicated to Lord Shiva. This coming together is led from the front by Goddess Bhagavati, and Lord Krishna, presiding deities of Paramekkavu and Thiruvambadi temples, located close to the Vadakkumnatha Temple. The sprawling Thekkinkadu grounds around the Vadakkumnatha Temple become the rendezvous for gods and goddesses from adjoining temples.

Thrissur Pooram owes its genesis to the erstwhile ruler of Cochin State, Prince Rama Varma, popularly known as Sakthan Thampuran. Pooram is an annual event held on the pooram asterism in the Malayalam month of Medam. This month roughly corresponds to the months of April and May.

Prior to the pooram day, the premises of Paramekkavu, and Thiruvambadi temples witness rituals like, kodiyettu or the hoisting of the festival flag; poora pradakshinam, which is a procession taken around the sanctum sanctorum and also para nirackkal an offering made to the presiding deities.

As part of the 5-day long pooram festivities there are exhibitions that take place in the town of Thrissur. Among them, the one that draws large crowds is the Aana Chamayam. This exhibition organized by Paramekkavu and Thiruvambadi temples would have on display the entire range of decorative items used to make-up the elephants taking part in the festival. These include ornamental forehead gear called the Nettipattom; the glittering parasols called Muthukuda; whisks or Venchamaram, made of Yak hair; the circular peacock feather fan called Aalavattom and many other items.

If you want to experience the enthusiasm that slowly builds up and peaks on the pooram day, then you need to step inside the famous Thekkinkadu grounds in front of the Vadakkumnatha Temple. This is where the pooram revelry is palpable with hawkers doing brisk business, elephants showing up in groups for feeding and routine care and a host of entertainments involving folk performers entertaining the crowd.

Early morning, on the pooram day, upa poorams or representations from adjoining temples like Kanimangalam, Karamucku, Laloor, Choorakottukara, Panamukkampally, Ayyanthole, Chembukkavu, Neythilakavu and other temples in and around Thrissur town would proceed to the Vadakkumnatha Temple. The procession from Kanimangalam Temple will be the first to reach the Vadakkumnatha Temple followed by others. They all march out after paying homage to Lord Shiva.

Soon the festivities would gain momentum with the commencement of the procession from the Thiruvambadi Temple with elephant carrying the idol of Goddess Bhagavati and first reaches Brahmaswom Madom before going to the Vadakkumnatha Temple.

The visit to Brahmaswom Madom, the ancestral house of a Brahmin family who helped Sakthan Thampuran, (former ruler of Thrissur) in the formative days of the pooram festival is known as Madathil Varavu. As per tradition the deities rest here for a while before proceeding to the Vadakkumnatha Temple by noon.

Around the same time, the procession from Paramekkavu Temple carrying the idol of Goddess Bhagavati, its presiding deity, reaches the Vadakkumnatha Temple. The arrival of the entourage from Paramekkavu at the western entrance of the Vadakkumnatha Temple signals the start of the famed Ilanjithara Melam - the traditional percussion ensemble, consisting of drums, horns, and cymbals, held in front of the 'Ilanji' tree inside the temple premises. It is a musical ensemble that reaches its crescendo with an elated crowd cheering its mesmeric rhythm.

And finally by evening, 15 majestically caparisoned elephants of Thiruvambadi Temple emerge through the southern gate of the Vadakkumnatha Temple to face a line up of 15 equally decorated elephants from Paramekkavu Temple. Each pachyderm bears an umbrella holder, a peacock fan carrier and a yak-tail flywhisk wielder. Before dusk sets in the spectacular Kudamattom (exchange of parasols) would begin to the loud cheer of the spectators, who by now would have gathered in thousands. This ceremony takes place to the accompaniment of Pandimelam - the traditional orchestra. The ceremony will last beyond sunset, finally paving way to a dazzling display of fireworks by early morning.

Most of the pooram day attractions are staged again the next day and is known as Pakal Pooram or the pooram held during the daytime. It culminates in bidding farewell by the presiding deities of Thiruvambadi and Paramekkavu temples in front of Lord Shiva, the presiding deity of Vadakkumnatha Temple. They promise to meet next year, before they part. And by evening, Kalaasakottu or the final beating of drums, signal the end of the pooram festivities, followed by Vedikettu or bursting of high-sounding crackers. Officially the traditional community-feast in which people partake to have the Poora Kanji, a specially made porridge, signals the end of pooram festivities.

Kerala is the land of never-ending festivals and Thrissur Pooram is without doubt the grandest of all. Thrissur Pooram is not just an occasion for Gods and Goddesses, but also for mortals who cherish every moment of the warmth and the spirit of togetherness. Thrissur is well connected by rail and road and is only 54 km from the Cochin International Airport.