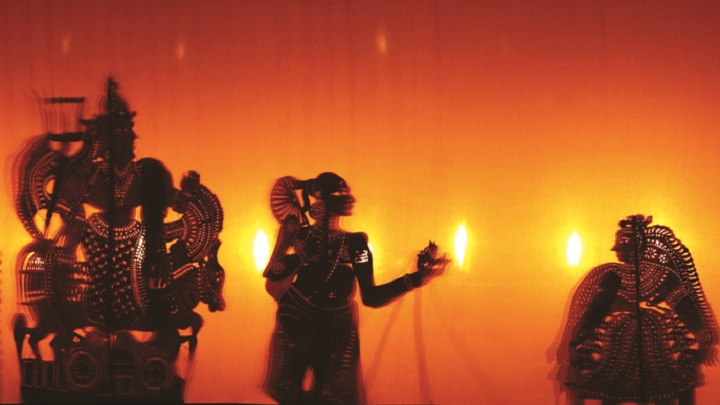 Kerala, a land with a culture and tradition that have many interesting facets, has over the years become a fascination for visitors from around the world. Its cultural fabric is woven by the captivating threads of traditional practices and beliefs. Among them, the ritual arts deserve special mention.

An ancient ritualistic art form, very little is known about the period of origin of Tholpavakoothu. Finding a place among the ancient art forms of Kerala, typically Tholpavakoothu is presented for 7, 14 or 41 days as an offering at temples dedicated to Goddess Bhadrakali. The lead puppeteer is called pulavar.

It is believed that the compositions for Tholpavakoothu were done by Chinnathampi Vadhyar, based on the version of the epic Ramayan written by the great Tamil poet and scholar - Kambar, who lived in 12 C.E. With Ramayana as the theme, the puppets in Tholpavakoothu represent characters in it.

As per belief, Goddess Bhadrakali who was busy in her fight with Dharika, whom she eventually kills, could not watch the triumph of Lord Rama over the demon king Ravana and the subsequent release of Sita, the beloved wife of Rama. Since the goddess missed that epic battle between Rama and Ravana, the story of Ramayana was staged in the form of Tholpavakoothu, especially Yudha Kanda, the chapter dealing with the war. The story of Ramayana is composed for Tholpavakoothu in 21 parts, which are presented during 21 nights. About 180 puppets are needed for a full performance.

The art form is usually staged late in the evening. By nightfall, performance begins on a specially made stage called the koothumadam. Here, the puppets are played behind a long curtain illuminated by traditional earthen lamps. The puppets are flat and made of malleable deerskin, and their shadows fall on a white cloth stretched taut across the koothumadam.

As per the local belief, this ritual art form is watched by the goddess, who in turn blesses the community.