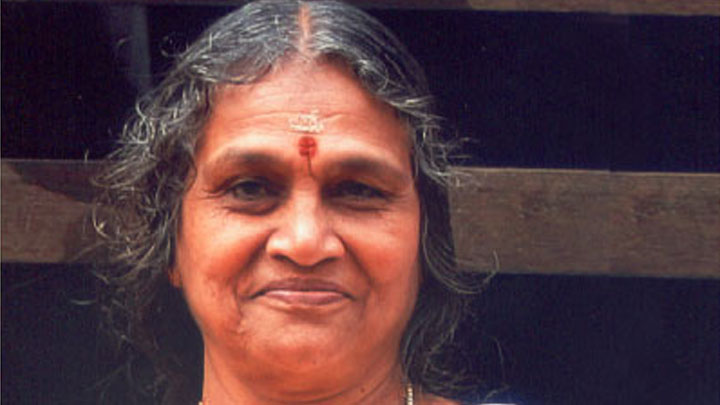 A Danseuse Wedded to Mohiniyattam

A veritable matriarch who infuses life into the dance of the enchantress with slow, graceful, swaying movements of the body and limbs, accentuated by highly emotive eye and hand gestures. This artistic excellence in elegant gold-filigreed dress, in pure white or ivory is none other than Kalamandalam Sathyabhama, who has been recently honoured with the Padma Shri.

Kalamandalam Sathyabhama excelled as a performer and equally so as a choreographer. Her innovations show influences of Bharatnatyam and Kathakali. She redefined the dynamics of the dance form inspired by the lasya segments of similar art traditions. Kaikottikali and Kathakali exerted a positive influence in building up her career in dance choreography. Ulachil (swaying of the torso horizontally) and chuzippus (bustle of the torso) of female characters in Kathakali were re-employed in the body kinetics of Mohiniyattam. Because of her, several movements of the feet and positioning of hands from kaikottikali found legitimate space in Mohiniyattam. It was Sathyabhama who altered the custom of executing all the adavus (movements) at a stretch followed by abhinaya (acting). In lieu of this, she interspersed abhinaya following each adavu. Similarly, credit goes to her for providing myriad hues of expressions to the heroine hit by the five arrows of Lord Kamadeva.

Sathyabhama joined the Kerala Kalamandalam as a teacher in 1957 and went on to become its first woman vice-principal before her retirement in 1992. In the domain of Mohiniyattam, she is held in high esteem, because of her sincere efforts in maintaining a dynamic link between tradition and innovations. She has also made some phenomenal contributions in the costume and jewellery of Mohiniyattam as we see it today.

As an outstanding exponent of Mohiniyattam, many recognitions came to her in the form of Central and Kerala Sangeeta Nataka Akademi Awards, Keraleeya Nrithya-Natya Puraskar, Kerala Kalamandalam Award and the latest honour is the Padma Shri (2014).

It's only in awe and admiration that one can look up to her, for the kind of efforts, she has taken to inspire and transform every aspiring soul in a dancer. Kalamandalam Sathyabhama is the crowning glory of Mohiniyattam, a passion that she has been following for the past so many years.