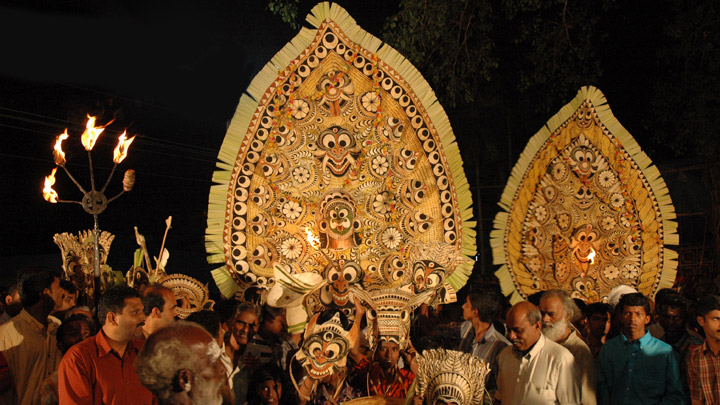 Nightfall instates a fiery spectacle in the Kaali temples of Pathanamthitta. The images of the fierce Mother Goddess adeptly drawn on the mask made of arecanut spathes glow in the traditional torches. The haunting gothic rhythms of legacy and the movement’s writ into the tradition stupefy the devotees to an astonishing theatrical. It is a combination of music, dance, painting and satire and offers multifaceted cultural signification.

We are talking about Patayani, a ritual dance developed through village cultural practices with Pre-Dravidian origins. The Malayalam months of Meenam and Medam (March-April) pay homage to the smoldering splendour of the vicious masquerades of the Mother Goddess,   torched to life and mortal fury.  Patayani literally means ‘rows of army’.

Hundreds of devotees throng to the different temple precincts of Pathanamthitta to witness the majestic fiesta of Patayani. At the Kadammanitta Devi Temple, Patayani festival is a rupture of multiple hues and passionate devotion rooted in legends and myths. Othara Patayani is held at the Puthukulangara Devi Temple at Othara. The appearance of the Bhairavi Kolam made of 1001 painted arecanut fronds on the last day, is the most impressive sight to behold here. The annual Patayani festival at the ancient Kadalimangalam Devi Temple at Venpala near Thiruvalla is famous for its ceremonial procession of different kinds of Patayani kolams (effigies), with the accompaniments of traditional temple percussions.

The performers wear spectacular masks and headgears, called Kolams. Padayanippattu is the song, which accompanies the performance and includes prayers, admirations and requests to the deities. The major accompaniment is thappu; a one-sided drum. The performer makes rhythmic footsteps in tune with the Padayanippattu and the Thappumelam. This is called the Kolamthullal.

As per legends Patayani is a symbolic act for pleasing Goddess Bhadrakali who remains violent after her victory over the mythical demon Darika. Whatever may be its legend, this ritual dance adds an arcane charisma to the fêted heritage of Pathanamthitta.