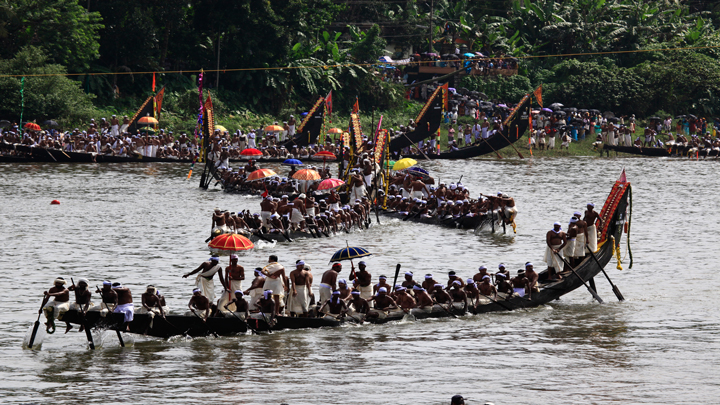 A brilliant blend of aesthetics and endurance, the Chundan Vallom has many unique features, and it captivates spectators with its synergy and speed. Different types of boats compete in the many boat races of Kerala. But when the 138-feet-long snake-boats enter the arena, it becomes a different ballgame. The majestic chundan vallom will take the centre-stage as the brimming rivers and canals passionately embrace the splash of the oarsmen.

The chundan vallom or the snake-boat, owing to its shape, stands apart from other traditional boats of Kerala due to its extraordinary length and design. Locally called chundan vallom, meaning ‘beaked boat’, because of its pointed prow, standing four feet above the water and giving the impression of a beak. The snake-boat, it is said, has its origins in Alappuzha with a history of over 400 years. Earlier, it was meant for the swift transportation of large posse of soldiers. At that time, once the wars were resolved the spirit of this wondrous multipurpose boat was kept alive through spectacular boat races.

The preparation of boats used in races demands great expertise plus dedication. The making of the chundan vallom is done in accordance with the specifications given in Sthapathya Veda, an ancient treatise, which deals in making of boats from wood. The hull of the chundans, which varies from 100 to 138 ft in length. After the completion of the boat the outside is coated with animal fat boiled with lime and the inside is usually smeared with fish oil. Eggs and fish oil are also applied on the exterior of the boat, enabling it to move faster in the water.

A single snake-boat can accommodate more than hundred oarsmen. At the centre of the chundan vallom, which was earlier used for mounting canons, stand two people who beat the odithatta (fire platforms) with poles and sing the vanchippattu (songs of the boatmen) to maintain the rowing rhythm. While the strongest oarsmen sit at prow to set the pace, the rear is managed by six hefty amarackars (helmsmen) who stand and help steer the boat. The person at the highest point of the boat is the chief oarsman. Enjoying the status of a deity, each chundan vallom represents a village and is a treasured possession, the very name of which infuses matchless passion.