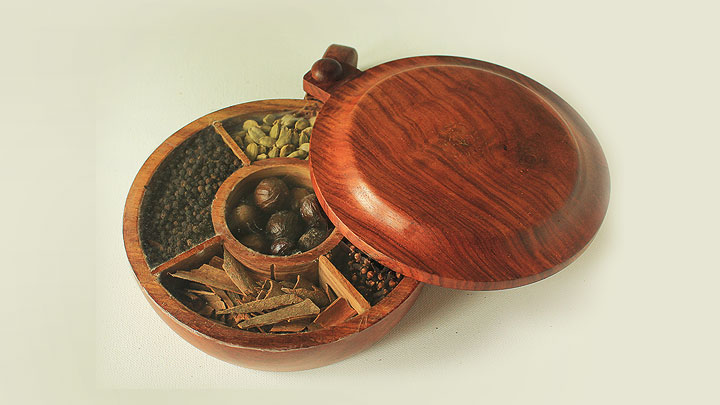 The Spice Garden of the World

Would you love to take the aroma of Kerala along with you?

There is a simple way to do that. Buy some Spices.

Spices embody the aroma of God’s Own Country. Kerala is home to a variety of spices: pepper, vanilla, cardamom, clove, cinnamon, nutmeg, ginger and turmeric. The flavour of spices lingers long in one’s tongue and even longer in one’s memory.

Spices shaped Kerala’s tryst with destiny. It was the fragrance of spice that awakened the curiosity of the explorers. Many braved mighty oceans and seas to seek this land out for its veritable treasure. Kerala’s spice trade with the world dates back to the 3rd millennium BCE. The Malabar Coast of Kerala was witness to the arrival of Arabs, Chinese, and European powers like the Portuguese, the French and the British. The spices of Kerala had become the most treasured and traded commodity.

The warm, humid climate of central Kerala, the hazy hill stations with their loamy soil rich in organic matter and reasonable amount of rainfall contribute to the production of spices in Kerala. Irrespective of cultural, religious and other differences, spices occupy a special place in providing a unique flavour to the culinary specialties of Keralites.

Known as Black Gold, pepper, thrives in Kerala due to a combination of natural advantages. This wrinkly black spice is the most celebrated of all the spices of Kerala. Known for its pungent aroma, the Cinnamon is integral to masalas (spice mix used for cooking). Historical records cite that Cinnamon from Kerala was used in embalming the dead bodies of the Pharaohs and in the manufacturing of perfumes and holy oils.

Rightly called as the 'Queen of Spices' cardamom is one of the most exotic and highly prized of spices. It has a very pleasant aroma and flourishes well on the cool, shaded slopes of the Western Ghats in Kerala. A common spice of Kerala, clove is the dried floral buds of Eugenia caryophyllata. Clove is one of the key ingredients of garam masala (spices in varying proportions, roasted and powdered and used for cooking).

The ambitious 'Spice Route Project' of Kerala Tourism in association with UNESCO plans to bring the ancient 2000-year-old Spice Route back to life connecting and sharing the heritage of 32 countries along the ancient route.

So, if you are still missing some spice in your life, then head for Kerala at the earliest.