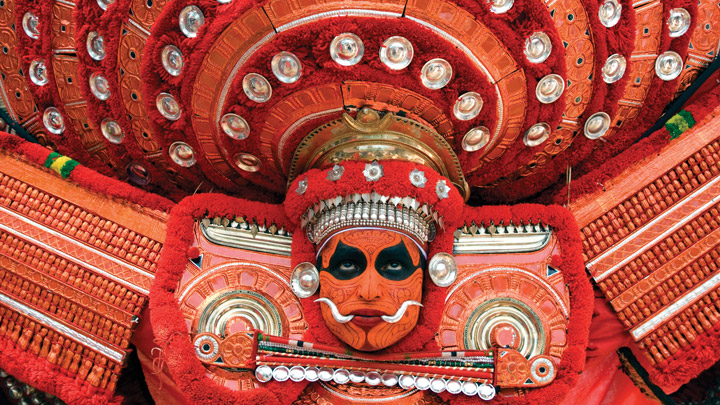 The Dance of the Divine

There is an explosion of colours with the awe inspiring headgears, costumes and face designs. The rhythm of the resonating beats of the chenda, the intense fragrance of the burning camphor mystifying the ambience. You stand agaped with saucer-wide eyes at the splendour of the dancing figure before you. These are the aspects that contribute to the grandeur of this spectacle called Theyyam.

A Theyyam performance is no single time experience. An ancient ritualistic form of worship native to the north Malabar region of Kerala, the roots of this folk art, which is a blend of dance, music and fervent devotion, can be traced back to the Chalcolithic Age.

Each Theyyam performance has an aura of divine splendor as it is accompanied by rituals and other devotional music. The tales woven into the history of this folk ritual range from that of yakshis (spirits) witches and myths of serpent and animal deities to the deeds of local heroes and ancestors. In many senses the Theyyam is often a form of historical documentation of the society. The Theyyam is also linked with fertility rites and many of its myths are intimately related to the curing of illnesses and agricultural productivity.

It is believed that while performing, the artist becomes the representative of the divine. The word 'Theyyam' is local parlance for God. To millions in Kerala, Theyyam is their visible and tangible Gods and Goddesses. It is usually performed in shrines; sacred groves called kaavu or at ancestral homes called tharavadu in villages. The Theyyam season in Kerala usually commences in October and lasts up to May.

Malabar is a coy land, one that reveals its treasures slowly. And the Theyyam is a ritual that should not be rushed into. Rather, take your time and savour its finest nuances to take home with you an experience that will remain etched in your heart for eternity.

To explore the varieties of Theyyam in Kerala, click here