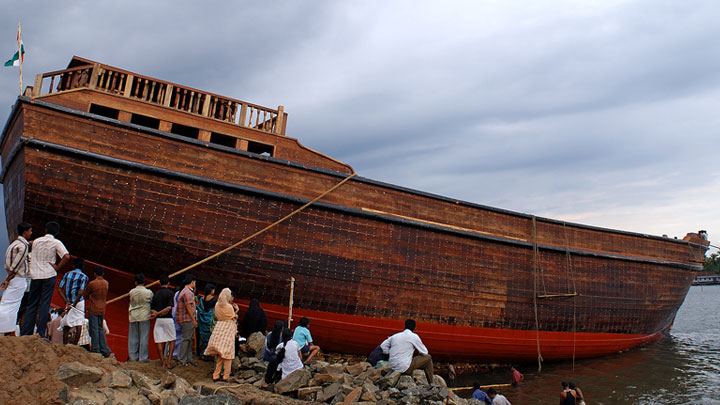 The Ship of Arabian Dreams!

Nestled on the banks of the sensuous Chaliyar River is Beypore, a land wrapped in the magic of Arabian Dreams!

Welcome to the home of the majestic Beypore Uru.

The name Uru is associated with the traditional ship building culture of Kerala, a culture that has been throbbing with life on these shores for the last 1500 years.

The art and science of making these ships came from the Arab world. The Arabs called them Dhows and they eventually became the traditional Arabian trading vessels. Once the Arab traders discovered wealthy Kerala, her solid timber, skilled craftsmen and her native technology centuries ago, they shifted their Dhow construction to Malabar (Northern Kerala).

A typical Uru is in appearance a large vessel. It demands hard labour and the dexterous hands of highly skilled craftsmen to build one. This seagoing vessel is made completely of wood and is built by joining planks of good quality timber.

Usually an Uru is built by a team of fifty men over a period of at least four years. No blueprints are made and the entire aspect of ship building is embedded in the minds of the highly skilled shipwrights. It is team work undertaken with minimum sophistication or modern machinery, following strict and orderly work ethics and also discipline. Visitors to the shipbuilding yard at Beypore are usually awestruck at the passion with which each man works.

The legacy of the Beypore Uru is one that each Beyporean upholds with great pride and honour. This pride is evident in the sparkle that twinkles in the eyes of the locals when they talk about the glorious years of yore. With the Arab royalty taking fresh interest in the Beypore Urus and placing new orders for the same, the shores of Beypore have burst into life again.

Drop by to be awed.