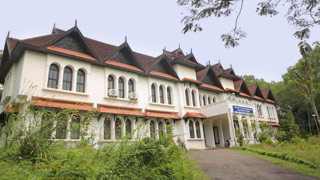 Whispers from the Past

The heavy, intricately engraved wooden door leading to the Manuscript Library of the century old Oriental Research Institute and Manuscript Library located in Thiruvananthapuram is unlocked and slowly pushed open. A heady concoction of the scents of lemongrass oil and ancient parchment greets you.

You remove your footwear in reverence and gingerly step into the large hall filled with rows and rows of age-old manuscripts, preserved in massive wooden shelves. As your bare feet touch the cold wooden floor, a heavy sigh filled with awe escapes your lips.

Before you, in an expanse of over 40,000 bundles of manuscripts covering over 65,000 separate works, sleeps our history, culture and heritage.

The story of Oriental Research Institute and Manuscript Library functioning under the University of Kerala began in 1908, when a new library department was founded by the royalty of erstwhile Travancore. It was formed for the publication of rare and old Sanskrit manuscripts. Tharuvai-Agraharam Ganapati Sastri was appointed the first curator of this library.

In his endeavour to expand the library’s collection, Ganapati Sastri frequently went on long trips in search of manuscripts in private possession. On one such journey, he stumbled upon the lost plays of Bhasa, the great dramatist of the first century BCE. He found them at Manalikkara Madom near Kanyakumari. Until then, Bhasa, known only through the references made by later dramatists such as Kalidasa was considered a figment of imagination. But this one incident threw open a new window to the history of literature. This discovery gave to the world ten of Bhasa’s long lost plays and brought the library into the spotlight.

Today, more than a century later, the library is the largest of its kind in the country. Situated inside the Kariavattom campus of the University of Kerala, the building the library is housed in is in itself a testimony for the richness of our heritage.

A vast majority of the manuscripts preserved at the Oriental Research Institute and Manuscript Library have been penned on palm leaves. To make each manuscript the green leaves of either the Kudappana (Corypha umbraculifera) or the Karimppana (Borasus flabellifer) palm trees were cut, dried in the shade, boiled in a mixture of milk and turmeric powder and treated again before they were used like paper. The treated leaves were then taken one at a time and painstakingly inscribed. The most common way of writing on palm leaves was by making scratches or incisions on its surface with a stylus or a sharp object. Carbon was then sprinkled on each leaf to make the letters legible. Thus was created on palm leaves, entire historical texts.

The Manuscript Library houses over 40,000 bundles of such meticulously created manuscripts. As you stroll down the rows of manuscripts, you can’t help but wonder at the pain and effort that had gone into creating every single page.

What surrounds you are not just palm leaves with etchings on them. But rather, each of them has congealed within the fine markings, bits and pieces of the writer’s soul.

Visiting Hours: Students and research scholars may use the library for reference by presenting an official letter. The general public and other visitors may visit the library on payment of the requisite entry fee. The timings are from 11 am to 3 pm.