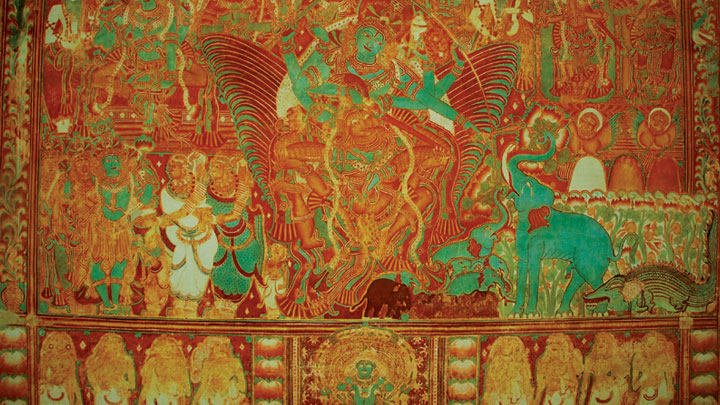 A Legacy in Colours

The traditional mural paintings of Kerala are a fine art of skill and creative excellence. Most of the noted mural works of Kerala were done between the 15th and 19th centuries. They bear a stamp of uniqueness in techniques used and aesthetics.

A mural is an artwork painted or applied directly onto walls, ceilings or any other permanent surface. In murals, architectural elements of the given space are harmoniously incorporated into its creation. Among murals, the ones from Kerala stand out for their finesse.

With the largest collection of murals based on ancient Indian mythologies, Kerala is at par with the State of Rajasthan. Some of the Kerala murals date back to the 8th century. Today the trend has shifted from wall murals to those painted on canvas and paper.

The materials used in mural art work like pigments, brushes, gum etc. are all taken made of natural materials like minerals and plants. The most frequently used pigments in Kerala murals are saffron-red, saffron-yellow, green, red, white, blue, black, yellow and golden-yellow.

The oldest of the murals found in Kerala are those in the Thirunandikkara Cave temple now a part of Kanyakumari district in the neighbouring State of Tamil Nadu. The largest mural panel in Kerala called the Gajendra Moksha is at the Krishnapuram Palace near Kayamkulam in Alappuzha district. Extensive murals depicting scenes from the Hindu epics, the Ramayana and the Bhagavatha are preserved at the Mattancherry Palace in Ernakulam district. The murals of the Shiva Temple at Ettumanoor provide insights into the earliest forms of Dravidian mural art.

An ideal souvenir to be treasured for a lifetime, Kerala murals are a symbol of natural beauty and grace, elegance and simplicity and of pious devotion. It is this humility that helps this art form overcome the ravages of civilization and time.