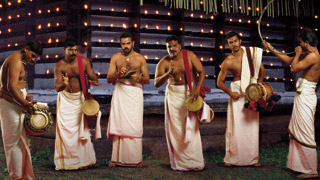 The heartbeats of the strip of greenery wedged between the turquoise blue Arabian Sea and the majestic Western Ghats is in itself a rhythm like no other. It is a mingled measure of the rustling palm fronds, whispering breeze and the murmering backwaters. In harmony with this enticing rhythm rings the notes of another that is quite captivating - Panchavadhyam.

Panchavadhyam is a classical orchestra that has reverberated through the shores of this quaint land for years. Pancha (five) Vadyam (instrument) is an orchestra, typical of Kerala, consisting of five instruments - Maddalam, Edakka, Thimila, Ilathalam and Kombu. It is an inevitable accompaniment during festivals, religious or otherwise. The most thrilling performance of Panchavadyam can be witnessed at most of the temple festivals in Kerala.

The maddalam is considered to be a divine instrument or deva vadya on account of its inclusion as a major accompaniment in the 'Dance of Lord Siva - the Destroyer’. References to maddalam date back to the 13th century. There are two varieties: Suddha maddalam and Toppi maddalam. The former is tied around the waist of the player with a cloth, while the latter is a smaller version suspended from the neck of the player. Barrel shaped and carved from jack wood, both ends of the maddalam are covered with stretched hide and fastened by leather straps. It is also an important instrument in art forms like the Kathakali, Krishnanattom and Thullal.

During the orchestra, it is the maddalam and the thimila both vying for prominence. The latter is an hour-glass shaped drum made from polished jack wood. The drumheads made of calf hide are held together by leather braces, which are also twined around the waist of the drum. This mechanism helps in adjusting the tension and in controlling the sound. It is an important part of temple rituals like the seeveli, a ceremonial procession of deities.

The edakka is an extremely sensitive percussion instrument. Made of wood and about a quarter metre long, the drumheads are held in position by interlacing cotton threads. The player beats the drum with one hand while simultaneously manipulating the strings with the other, thus creating a variety of musical notes. Kombu, literally meaning horn, is a C-shaped wind instrument made of brass or copper. Its shrill blare helps in subduing the pitch of the other instruments. The ilathalam is a native version of the cymbals.