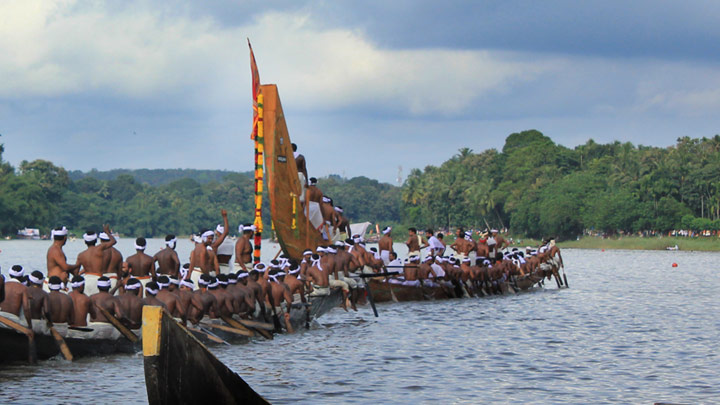 A Legacy that Floats

Over four centuries ago a king from Alappuzha faced a bitter defeat at the hands of his rivals. Frustrated and furious, the king decided to turn to ancient texts for advice on how to strengthen his navy. Thus, from the pages of age-old wisdom and tradition was born the Chundan Vallam or the snake-boat of Kerala.

Built according to the specifications of the Sthapathya Veda, an ancient treatise for the building of wooden boats, the Chundan Vallam is an excellent example of ancient Kerala’s prowess in naval architecture. A typical Chundan Vallam is 138 ft long and can accommodate more than 100 oarsmen.

Snake-boat, so called for its resemblance to the shape of a hooded snake, is the traditional naval boat of Kerala. The local populace called it by the pet name Chundan Vallam, because of the resemblance of the boat's prow to that of a bird's beak.

Designed during the era of King Devanarayana of Chembakassery, the elegance and grace of the majestic boats made it the pride of the people. Years after the wars came to an end, the boats continued to play a major role in the lives of the people. These boats are now used for boat races.

For boat races, two men stand in the central portion of the Chundan Vallam, which was once used to position the canon and beat the Odithatta (fire platforms) with poles and sing the Vanchippattu (songs of the boatmen) to maintain the rhythm of rowing. While the strongest oarsmen occupy the bow portion, the stern is manned by six well-built Amarackars (helmsmen) in standing position, who help to steer the boat. The person at the highest point of the boat is the chief oarsman. Today, every snake boat represents a village and the boat races have today become an integral part of the cultural identity of the land.

The largest team sport in the world, the Chundan Vallamkali or the snake boat race are of two types. One is the competitive type like the Nehru Trophy Boat Race and the other is the ritualistic type, like the Aranmula Boat Race. While the former is a blend of fun, frolic and passionate competition the latter has more to do with devotion, rituals and prayers. Palliyodams are Aranmula's unique snake boats. Devotees of Aranmula Parthasarathy Temple regard it as the divine vessel of the deity.

The backwaters are soothing and the gentle breeze, caressing. But, when the snake-boats slide onto the placid waters for a race and the oars are set in motion, the gentle backwaters transform into a blazing racetrack.