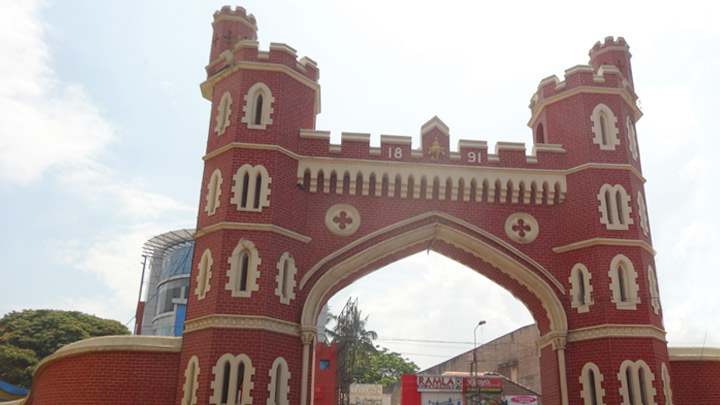 A Heritage Nurtured by a Fort

Put on one's walking shoes, hit the streets and interact with the locals. Very often, this could turn out to be your best option to experience the true flavor of a destination. Each destination offers a different treat to its visitors. A walk through the roads and lanes of the East Fort area in Thiruvananthapuram is the best way to get a real taste of this capital city of Kerala.

Start your day with a holy darshan of Lord Vishnu at the Sree Padmanabhaswamy Temple. The architecture of the temple is a blend of the Kerala and the Dravidian styles and its history dates back to the eighth century.

After the visit to the temple, one may check out the Kuthiramalika Palace Museum and marvel at the rare specimen of craftsmanship. This palace was built by Maharaja Swathi Thirunal Balarama Varma, king of erstwhile Travancore, who was a great poet, musician, social reformer and statesman. The visiting hours here are from 0830 - 1300 hrs and 1500 - 1730 hrs. The palace remains closed on Mondays.

The Krishnavilasam Palace is yet another one that should not be missed while you are in the East Fort. Built by King Sree Moolam Thirunal of Travancore in 1885 the palace integrates the traditional and western styles of architecture.

The Ananthavilasam Palace close to the Krishnavilasam Palace is considered the most beautiful of all. Built by King Vishakam Thirunal in 1880, the palace situated south of the Padmanabhaswamy Temple, exudes the Barouque and Rococo styles of architecture.

An integral part of Kerala culture is its martial art form - Kalarippayattu. An intricate blend of physical prowess, concentration, techniques and indigenous medical system, this form of armed, close-quarter, hand-to-hand combat is unique to Kerala. This makes CVN Kalari Sangham the next stop. Built in an east-west direction about 4 feet below the ground level, and closed on all sides, except for a small door on the eastern side, this traditional kalari (practice ground) suits the tropical, humid climate of Kerala. Lecture-demonstrations are held for interested groups at the kalari. The timings are usually 0600 to 0900 hrs and 1700 to 1900 hrs.

Vasudeva Vilasam Ayurvedic centre at East Fort is worth visiting as it would provide with many useful information on the relevance and practice of Ayurveda.

Walking over to the nearby Abhedanandha Asram will give you an insight into the spiritual life of Keralites.

Strolls through the agraharams here (residential areas of the Brahmin community) will give you an idea of the community's typical settlement layout. Access to these homes is not possible, since these settlements are not tourist attractions.

Outside the East Fort, towards the east is the Chalai bazaar. It is a very old traditional bazaar and one that would provide you a flavor of a typical Kerala market.

One may wind up the walk-tour of the East Fort with Margi, situated on the north-western fringe of the East Fort. This is an art and culture centre, ideal for those who are keen to get acquainted with some of the performing art forms of Kerala like Kathakali, Kutiyattam and Nangiarkoothu.