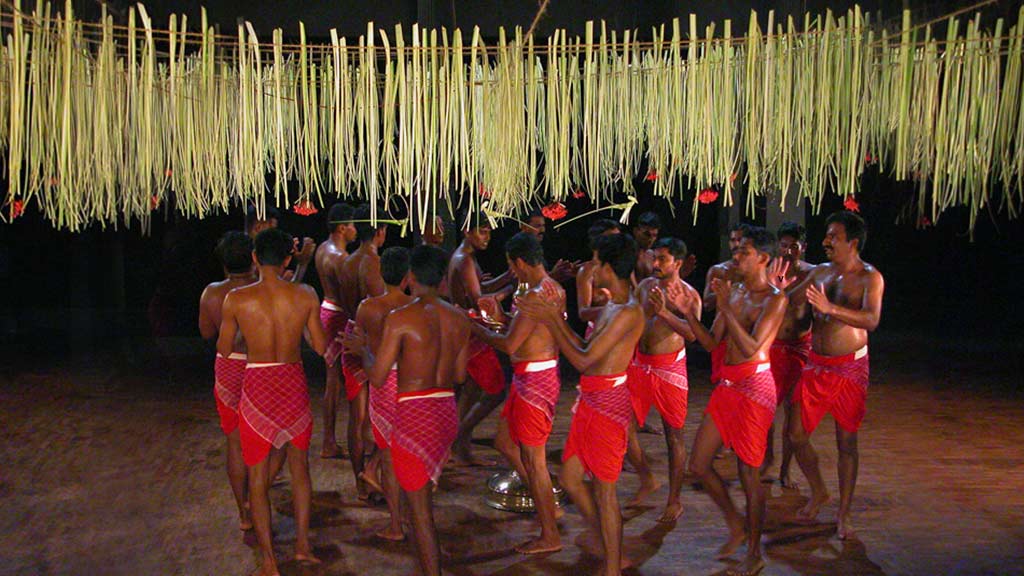 The cultural and traditional vibrancy of Kerala is visible in its wide variety of art forms. One such art is Poorakali. Popular in the northern part of Kerala, this ritualistic art form showcases the artistry of young men decked up in special costumes as they dance around a huge, multi-tiered, lit lamp (nilavilakku).

Poorakali is usually conducted in Bhadrakali temples as part of their nine-day Pooram festivals.

Spontaneous rhythmic steps and dynamic music are the specialties of Poorakali. The dancers themselves play the part of singers. They maintain the rhythm by clapping and carrying out harmonized foot-thumping movements. The songs are mostly based on the Indian epics, Ramayana and Mahabharata.

According to mythology, Poorakali is conducted as part of honouring Lord Kamadeva, the God of Love. It celebrates the rebirth of Kamadeva, who had been burnt to ashes by Lord Shiva.

This art form is performed with utmost devotion and reverence. The performers who belong to different communities like Theyya, Maniyani, Chaliya, Asari, etc. usually undergo arduous and intense practice sessions and a month of abstinence before their presentation.

Poorakali performances have close resemblance with the martial art form, Kalaripayattu. Marathukali is a variation of Poorakali that is conducted as a competition between two communities in temples.

Poorakali is a celebration of dance, martial arts, myths, traditions and cultural opulence of God’s Own Country.