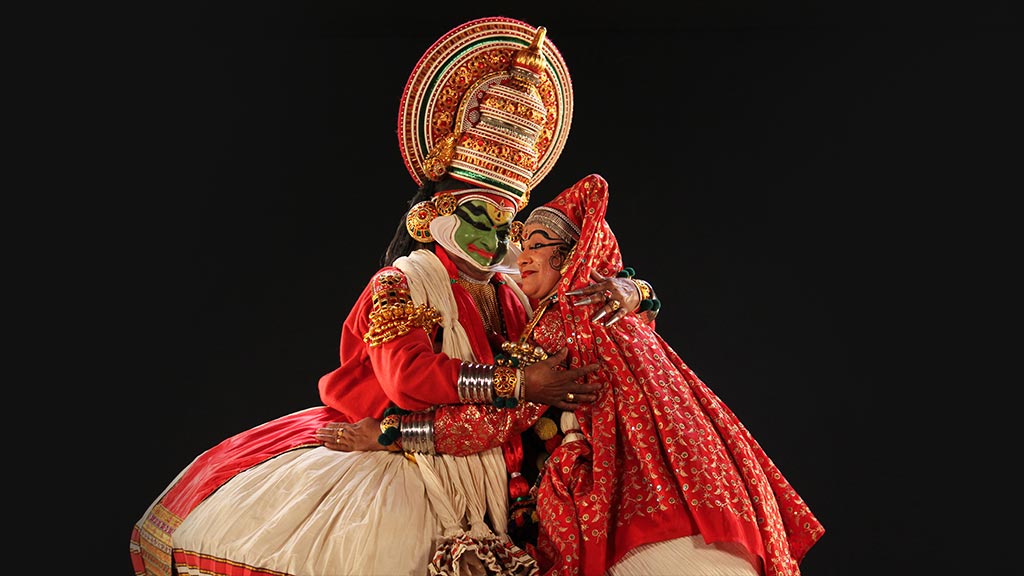 Kathakali is the classical dance-drama of Kerala that has aficionados across the globe. Ranked high among Indian dance forms, it is a unique blend of dance, music, action, literature and even painting.

Kathakali literally means ‘story play’ and its performance is basically the dance version of a play. It is based on the epics the Ramayana and the Mahabharata as well as the Puranas. Kathakali chronicles the lives, loves and conflicts of the gods and other supernatural beings of Indian mythology.

The characters in Kathakali take on superhuman qualities to match the stature of gods. Preparation for the performance is lengthy and disciplined.

Striking and vivid make-up is the highlight of the dance form. There are four kinds of costumes and make-up (Veshams) - Pacha, Kathi, Tadi and Minukku. Pacha or Green is generally used for gods and heroes, while Kathi or Knife represents the villainous and the wicked. Tadi or Beard is meant for characters displaying superhuman qualities. Minukku or Shine make-up is relatively plain, and is used for women characters and sages.

Decorative headgear set with red and green stones adorns all the major characters. Heavy ornaments cover the upper torso, and the superhuman size acquired by the big white skirt enhances the stage presence of the character.

Once he appears on the stage, the performer is the undisputed monarch, with the musicians closely following his rendering of the song. The Drums (Maddalam and Chenda), a Gong (Chengila) and Cymbals (Elathalam) provide the music to the play.

Vivid and eloquent in its characteristics mudras, natural and impressive in gestures, graceful and rhythmic in movements, pleasing in choreography and delightful in the wealth of imagery, Kathakali is a visual delight.