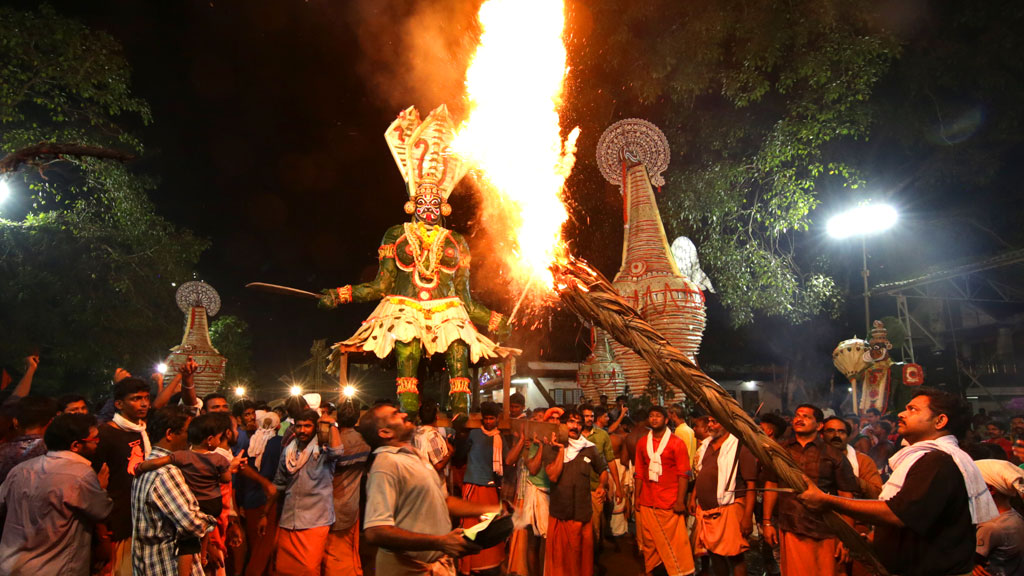 Padayani - Of Culture, Mythology and Grandeur

Believed to be the oldest Padayani in Kerala, Neelamperoor Padayani transforms a sleepy hamlet of Alappuzha to one that is rich in grandeur and spectacle. Held at the precincts of Palli Bhagavathi Temple, the Padayani at Neelamperoor is a celebration of culture and mythology.

Padayani is one of the most colourful and spectacular folk arts associated with certain temples in central Kerala. It is a symbolic victory march of goddess Kali after vanquishing the demon Darika.

The Neelamperoor Padayani is usually conducted in the Malayalam month of Chingam (August/September) at Palli Bhagavathi Temple, which is believed to be around 1,700 years old. The Padayani celebrations begin right after the Thiruvonam asterism, which is on the Avittam day, and continues till the Pooram asterism which marks the birthday of the Bhagavathi.

When dusk sets in, the temple grounds come to life and the festivities begin. The effigies of mythological characters such as Bhima, Ravana and Yakshi are paraded before the deity. Devotees carry these effigies to the accompaniment of soul-stirring music and dance in sync with the beats, in an attempt to propitiate the deity.

The arrival of the effigies, punctuated by the breath-taking display of fireworks and reverberating beats, raise the tempo of the festival. The arrival of huge effigies of swans is what the devotees wait for. These swans can be as big as 20 feet, and their arrival is greeted with much fanfare.

Travellers from far and wide converge at Neelamperoor to witness the grand spectacle. It is also a much-awaited moment for villagers as well, and we can see them in full attendance and high spirits during the festival.

If you want to know more about Padayani, check this https://www.keralatourism.org/padayani/