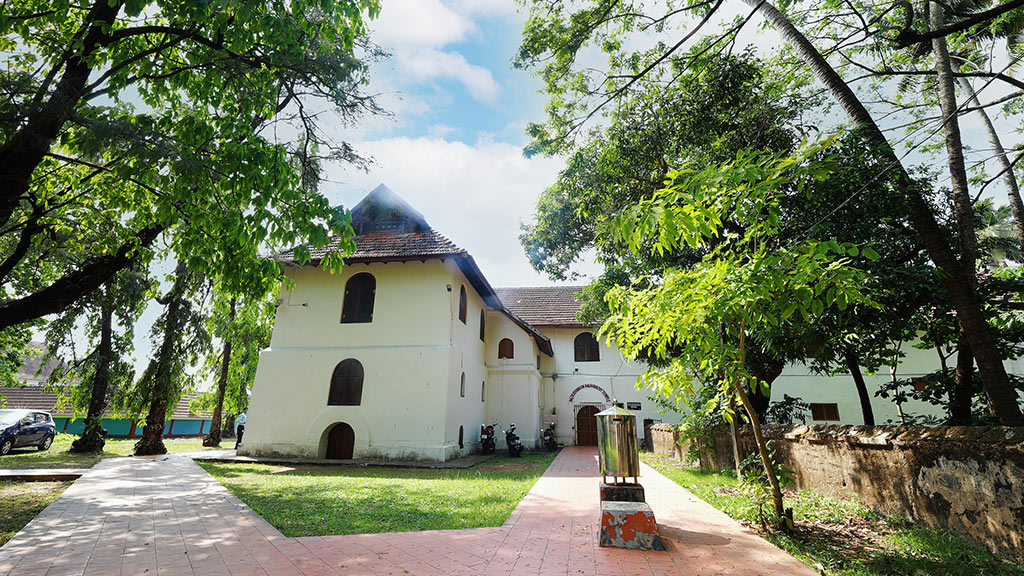 One of the structures most visited by tourists coming to Fort Kochi is the Mattancherry Palace in Ernakulam district. It is a fine example of Kerala-style architecture with a touch of European influence. This Dutch Palace was built by the Portuguese around 1545 CE and gifted to Veera Kerala Varma Raja of the Kochi dynasty.

A two-storeyed structure, the palace is built in the traditional Kerala naalukettu model with four separate wings opening into a central courtyard. A temple of the royal deity Pazhayannur Bhagavathi is situated in the central courtyard while two other temples on either side of the palace are dedicated to Lord Krishna and Lord Shiva. Once we enter the palace we notice the long and spacious halls and arches as well as arches that are characteristic features of the palace. The flooring was done using a mixture of burnt coconut shells, lime, plant juices and egg-whites.

The ceilings of halls are decorated with wood-carved floral designs including the design of an inverted lotus. Even brass cups are used to embellish the ceiling of the dining hall. A few important attractions for tourists visiting the palace are mural paintings and a collection of antique royal regalia. The intricate mythological mural paintings in rich warm colours are a treat to visitors. The entire story of Ramayana is depicted in the breathtakingly beautiful mural paintings in the Royal Bed Chamber.

The coronation hall houses life-size portraits of the erstwhile Kochi kings who ruled from the year 1864, dressed in their coronation robes. Some of the robes and headgear shown in the portraits have been kept on display.

Besides these, there are exhibits of Dutch maps of old Kochi, royal palanquins with floral designs, silver sequined gowns, royal parasols made of silk and brass, the ceremonial royal sword and other royal paraphernalia on display in different rooms of the palace. The weapons displayed include sheathed swords, daggers and spears.

Paradesi Synagogue, Jew Street, Dharmanath Jain Temple, Police Tourism Station and Museum are some of the attractions near the palace.

To view the palace, visit https://www.youtube.com/watch?v=-ywpAKC0qpE&t=105s