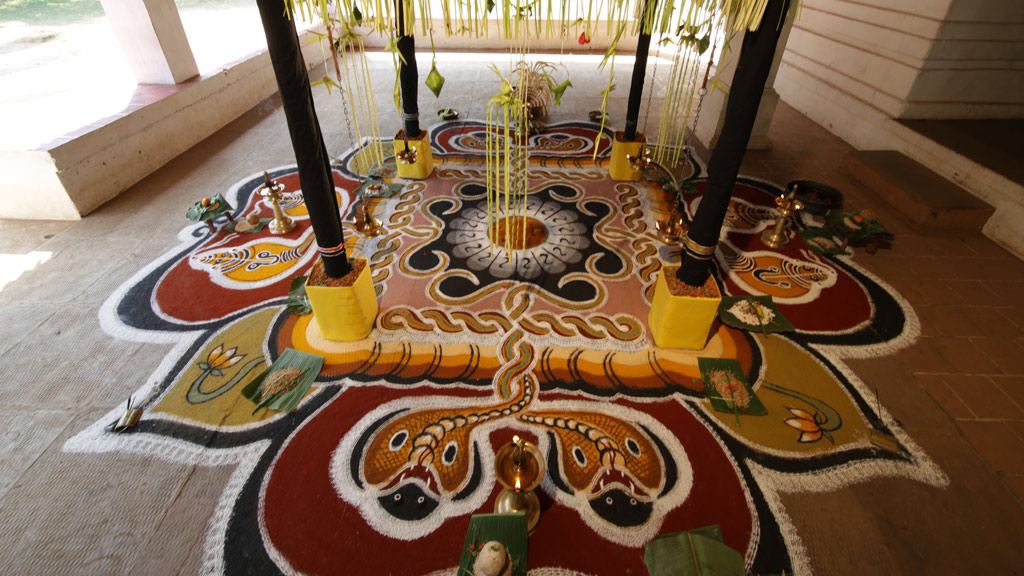 Sarpam Thullal (Dance of Snakes) is a unique ritual art performed in temples and sacred groves in Kerala to appease the snake gods and thereby bring prosperity to the family.

Also known as Nagakalam Pattu, the ritual art is usually performed by members of the Pulluvar community. The male member of this community is called Pulluvan and the female is known as Pulluvathi. Pulluvan and Pulluvathi perform several unique rituals including prayers and offerings. Kalam mayikkal, erasing of the kalam is the final act.

The ritual begins with the drawing of a Kalam on the floor and natural powders are used as colours. The drawing of intricate designs is usually done in the courtyard of the houses, and figures of Nagayakshi and Ashtanagakkettu feature among them.

Two girls are made to sit in front of the Kalam and songs are sung to the accompaniment of Pulluvankkudam, Pulluvan Veena and Ila Thalam. As the songs progress, the girls captivated by the rhythm and the atmosphere begin to make serpent-like movements. The final stages of the trance-like dance are a violent frenzy of rhythmic fervour in the climax of which the girls erase the Kalam with coconut-flower bunches. It is believed that the spirits inhabiting the 'sacred groves' will bless the devotees at the end of the ritual.