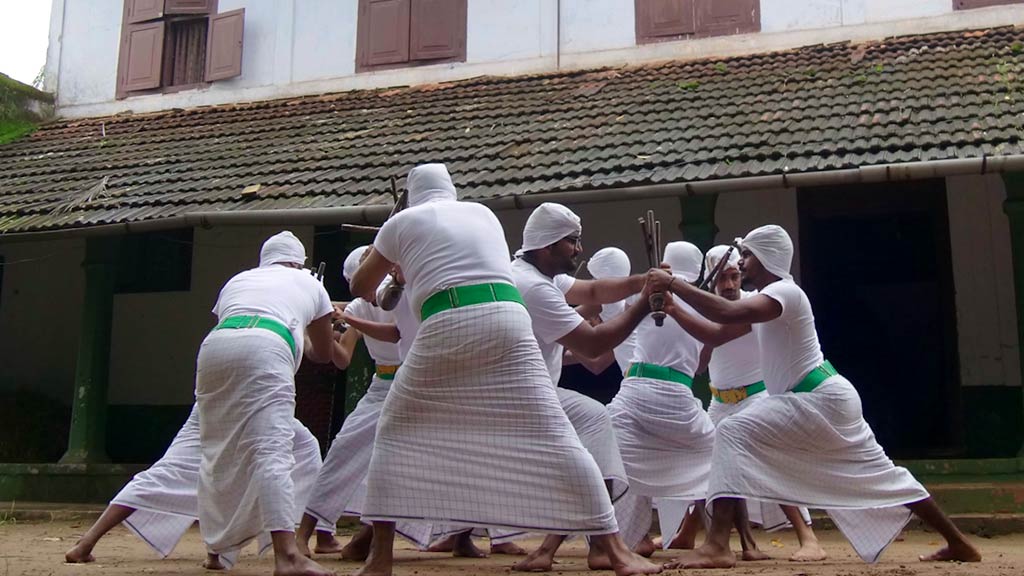 Looking relaxed in their native costumes and exhibiting effervescent expressions, the dynamic group of men who perform Kolkali is truly a treat to watch.

Popular in the North Malabar region, this rhythmic dance art form displays an eye-catching performance of men who move about in a circle, striking small sticks and keeping rhythm with quick steps.

There are two forms of Kolkali popular in Kerala –Payyannur Kolkali and Mappila (Muslim) Kolkali.

Kolkali usually begins with Vandanakali where Lord Subramanian and Lord Ganapathy are praised, and is followed by other styles of dances in diverse tempos. The songs of Kolkali unfold devotional tales of regional Gods.

Kolkali is an intrinsic part of the life of Payyannur in Kannur district and it is believed that Kolkali has existed here for more than a millennium. You can still see several groups of youths of Payyannur and neighbouring areas passionately engaged in Kolkali performances. Anidil Raman Ezhuthachan of Payyannurwas a popular writer of Kolkali songs. References of Payyanur Kolkali can be traced back to Sangam Literature and the “Drona Parvam” of the Mahabharata.

Though Payyannur Kolkali has similarities with the movements in Thiruvathirakali and Kaikottikali, it is more closely related to Poorakali in its steps, body language and music.

In earlier times, women also took an active part in this art form. The women’s performance placed emphasis on dance steps, and was called Kolattam.

During Mappila Kolkali performances, men dressed in mundu and undershirt, form a circle and move around singing and rhythmically striking hand-held sticks. This is the Muslim version of the indigenous art form known as Kolattam. Mappila Kolkali usually starts with a prayer to Allah, Prophet Muhammed and Sufi saints. The old Mappila songs are sung at regular intervals in varying pitches, and with each variation, the circle either expands or contracts, with performers making brisk movements.

Kolkali, the age-old folk art form,took elements from the martial artform Kalaripayattu during the early stages of its development. The influence of Kalari can be seen in the body postures, choreography and footwork of the Kolkali performers.

The very scene of Kolkali artistes – all of the same height and with similar physique – performing dynamic steps against the backdrop of pulsating music, is a pleasing sight.

Kolkali is a vibrant art form that makes Kerala culture and her heritage opulent.