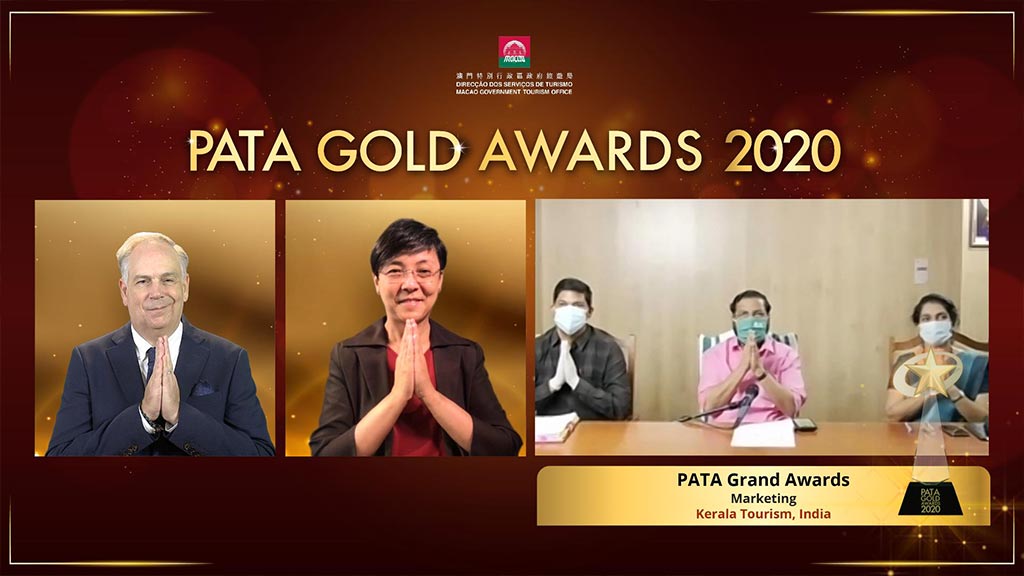 Kerala Tourism has gained another feather in its cap by winning the prestigious PATA Grand Award 2020 for Marketing.  This has given a huge stimulus to the tourism industry in the state that is grappling with the adverse aftermath of the COVID-19 pandemic. The award is in recognition of its internationally-acclaimed ‘Human by Nature’ campaign.

Kerala Tourism bagged one of the three PATA Grand Awards, which were announced live during a virtual presentation ceremony in Beijing.

It was for the first time that PATA Gold Awards, supported and sponsored by the Macao Government Tourism Office (MGTO), was held online, since its inception in 1995. This year’s awards recognised the achievements of title winners of three Grand Awards and 21 Gold Awards.

Expressing happiness over winning the top award, Mr. Kadakampally Surendran said ‘Human by Nature’ was a brilliant marketing strategy to revive tourism that had suffered a severe knock in the wake of the 2018 floods and the outbreak of the Nipah virus.

“I believe the latest award will provide a huge stimulus to the state’s ongoing efforts to rev up our tourism sector through innovative means as it is the mainstay of Kerala’s economy and contributes around 10 per cent of the state’s GDP. In the wake of the COVID-19 pandemic, we have to reboot the travel sector with focus on domestic tourism, and safety at every point of destination,” the Minister noted.

Ms. Rani George said, “The PATA Grand Award is a huge affirmation of the creative brilliance of our marketing campaigns and it shows that the ‘Human by Nature’ campaign has struck the right note with global travellers. We had found that tourists seek experiences at the destinations, and hence wanted to showcase the culture and daily life of the people of Kerala. We wanted tourists to experience the warmth and hospitality of our community, and the campaign touches upon the real life of the people of Kerala. The award has come at a time when we are in the process of working on the reopening of the destinations in Kerala, and it will naturally bring Kerala to the minds of prospective tourists."

She further added that presently the focus is on supporting the tourism sector with revival package schemes. “Our efforts are also geared towards putting SOPs in place for the tourism stakeholders, being a responsible tourism destination, and thereby giving the tourists confidence to visit the state,” she added.

Tourism Director Mr. P. Bala Kiran said, “We are trying to rejuvenate our tourism sector by introducing innovative business models that will give reassurance to travellers and ensure a responsible and sustainable tourism industry. We need to win the trust of travellers. That is going to be the cardinal driving force for the tourism industry in the state.”

The idea of a new campaign showcasing the culture and daily life of the people of Kerala put forth by Kerala Tourism was conceptualised and scripted by Stark Communications.

The campaign, which was carried out on national and international channels, in newspapers, magazines, portals and airport displays in key cities, helped in achieving Kerala’s record growth rate of 17.2 percent in 2019, the highest growth rate in tourist arrivals in 24 years.

The PATA Gold Awards 2020 received 121 entries from 62 organisations and individuals worldwide. The winners were selected by an independent judging committee of 16 individuals from various nations.

In all, PATA 2020 presented 21 Gold Awards and selected three Grand Title Winners for the best of show entries in the categories of Marketing, Sustainability and Human Capital Development.