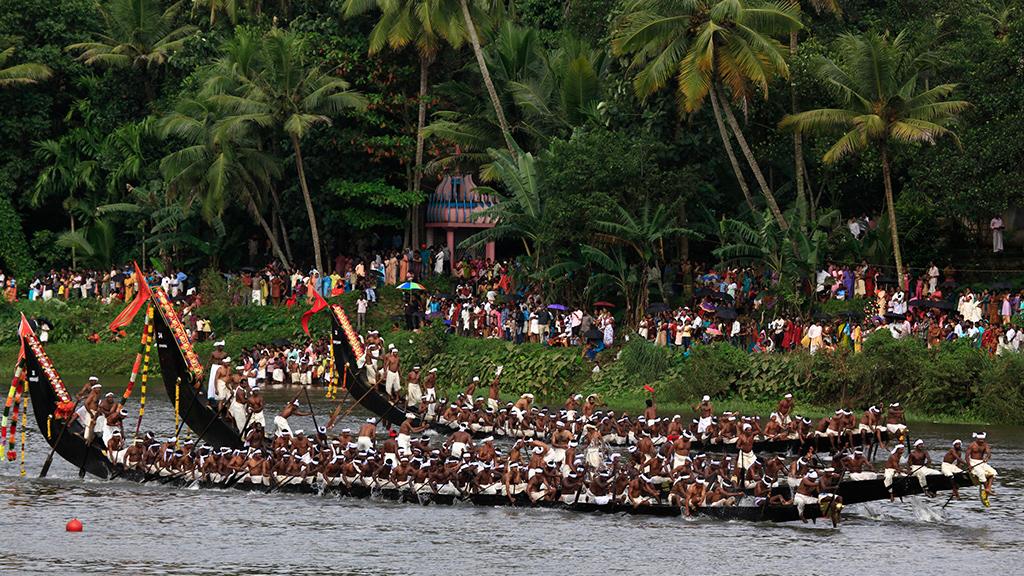 Aranmula Uthrittathi Boat Race in Pathanamthitta district is a grand sporting and cultural spectacle that is unlike any other boat races in Kerala. Its unique history, the legends that surround it, the types and shapes of boats that participate and the very backdrop of the race is different, making it a special event. It is closely linked to rituals and religious practices of the Aranmula Parthasarathy Temple.

The race is annually held on the day of Uthrittathi in the month of Chingam. It is also the anniversary day that commemorates the dedication of the idol at the Aranmula temple. According to the legend, goddess Bhumi Devi re-dedicated the idol in Aranmula from Nilakkal where ‘Arjuna’ had earlier dedicated it. It is believed that divine presence and blessings will be on the boats that participate in the race on that day. The race also has another mythical story. Lord Sri Krishna appeared in the dream of the Bhattathiri of Kattoor Mangadu Illam and asked him to give a feast to the Aranmula temple on every Thiruvonam day.

From that year onwards, Bhattathiri would bring the Thiruvonam feast on a boat to the Aranmula temple from Mangadu Illam. Once, the Bhattathiri was attacked by bandits on his way to the temple. The people of the locality came to know about the attack and arrived at the spot on boats to provide protection for Thiruvonathoni and Bhattathiri. Since then, chundan vallams that serve also as battle boats began to accompany the Thiruvonathoni. The water procession that we see today is conducted in remembrance of this event. Later, a boat race also started as a part of this event on the day of Uthrittathi. There are different opinions though, on how old the race is.

Aranmula chundan boats are different in shape and size from other chundan vallams in Kuttanad. They are referred to as Aranmula Palliyodams, as they were dedicated to the Aranmula Parthasarathy Temple. They are relatively bigger and taller in structure. Up to 15 people can stand right in the centre of these palliyodams.

Eastern-style vanjippattu (boat song) is the accepted version for Aranmula boat race. Aranmula has its own songs in vanjipattu genre, which include Kuchelavritham, Bheeshmaparvam and Santhanagopalam. The competitions in Pampa are conducted by categorizing the palliyodams as A and B grades. Apart from being a symbol of Kerala’s rich cultural heritage and traditions, the boat race is a visual extravaganza that attracts thousands of tourists to the shores of Aranmula.