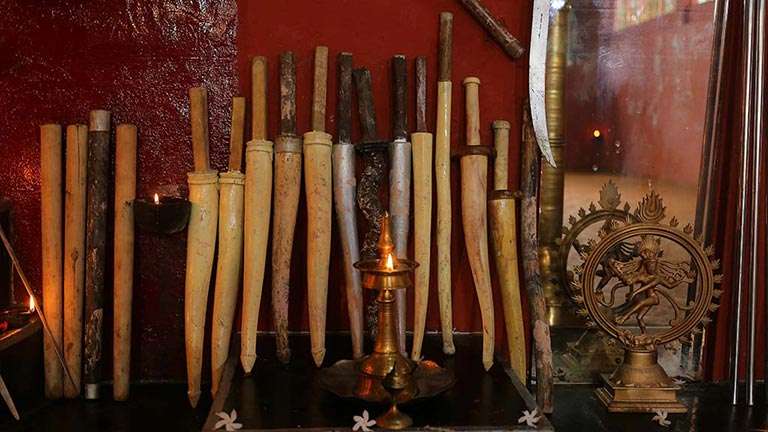 Deva Vidya Gurukulam boasts of a 600-year-old ancestry. It is part of Ayurmudra Heritage Project and located in Kottukal village in Thiruvananthapuram. Legend has it that the ancestors of the Gurukkal came to Kerala, on specific orders issued by Cheraman Perumal of the Pandya kingdom in Tamil Nadu. They accompanied the Perumal as Siddha vaidyas of his court, and were gifted land and other facilities by the ruler of Travancore. For generations they have been practising physicians and Marmachikitsa experts, and their latest link in the chain is Premnath, the Gurukkal of Deva Vidya Gurukulam. The centre was given government accreditation in 2000 to practise Siddha medicine.

The tradition of medical treatment followed at this kalari focuses on and follows the instructions laid down by Sage Agastya. Premnath’s guru was his grandfather Vizhinjam Narayanan Vaidyar. His reference texts on Siddha marma therapeutic treatment, the arcane secrets of the science and medicines were part of the family’s own heirloom of palm-leaf manuscripts, totalling to 400 in number.

In the ancient times, Kalaripayattu was not accessible to all. In course of time, many restrictions were lifted. But by then many modes that had gained currency in various regions disappeared from memory. Siddha marmachikitsa is also facing a similar threat. The concept of Ayurmudra Heritage came into being following a desire to see the benefits of this precious science reach the masses.

Usually training in Kalaripayattu begins early, ideally from the age of seven, and latest by 18. But such conditions do not apply in the case of training at the Marma kalari. All it requires is a will to learn and the stamina to complete the course. It helps if the student is mentally mature for the task. Besides Marmachikitsa, special courses on Prana Yoga and Mudra Yoga are also taught at Deva Vidya Gurukulam. A course called Atmarakshitam has been formulated by focusing on and customizing the adavus for girl students to help them defend themselves from attack. It has been so designed that the techniques can be mastered in a very short span of time (a fortnight or three weeks). A crash course has also been created for those who come from far-off places and stay here for a very brief period. Accommodation facilities at the centre ensure maximum closeness with Nature.

It also offers online courses in traditional Siddha, Siddha Marma, Siddha Yoga and Marma Kalari. This ensures uninterrupted training from anywhere in the world. Students from 23 countries, including Sweden, Italy, Hungary and Portugal, have signed up for various courses at Deva Vidya Gurukulam. Nearly 30 are undergoing training at the centre at present.

The Ayurmudra Project has designed many types of treatment procedures too. Some of them are Marmachikitsa, Siddha Kayakalppam, Pancha Pranasuddhi, Tripurasundari therapy and so on. Besides, it also offers Sukhachikitsa (rejuvenation therapy) and post-partum therapy. All the medicines required for treatments given at the centre are manufactured here itself. And the regulated diet of each patient is also taken care of. The centre has its own vegetable garden where it does organic farming.

Besides conducting performances for the entertainment of visitors, the centre also holds classes and exhibitions on demand within India and abroad. The personnel of Deva Vidya Gurukulam are regularly invited to conduct programmes in countries in the Middle East as well as in Malaysia.