The Paliath Achans were Prime Ministers to the Kings of Cochin, and their residences were as palatial as to merit the name Kovilakam or palace.  At one point of time, when trade wars among various foreign powers broke out, the then Paliath Achan offered substantial help to the Dutch, especially when they were threatened by the Portuguese. Later, the Dutch built a building in Chendamangalam, in appreciation of Paliath Achan’s services.   The latter used it as his official residence where a number of major political and administrative decisions were made and put into action. The structure is also known as the Dutch Palace.

‘Achan’ is the title given to the karanavar (head of the family) of the Paliam noble family. During the 17th and 18th centuries, he held the posts of Prime Minister and Chief of Army of the Kingdom of Cochin. As loyal ministers, Paliyath Achans defended Cochin against various domestic and foreign threats. During those times, Cochin witnessed many battles over rights with the Portuguese, the Dutch and the English. Cochin also faced frequent attacks from the Zamorins of Kozhikode, the Mysore army and also received threats from Thiruvithamcode. The stages of evolution of Cochin kingdom, the importance of the Paliam family and the life of nobility in the ‘Post-Swaroopam’ period constitute the theme of this museum.

The Kovilakam was meant solely for the residence of Valiyachan of Paliam. The two buildings nearby were used as his offices. Achan held court in the Durbar Hall at the eastern end of the first floor where he received the subjects and officials of the kingdom, and listened to the problems of the people. 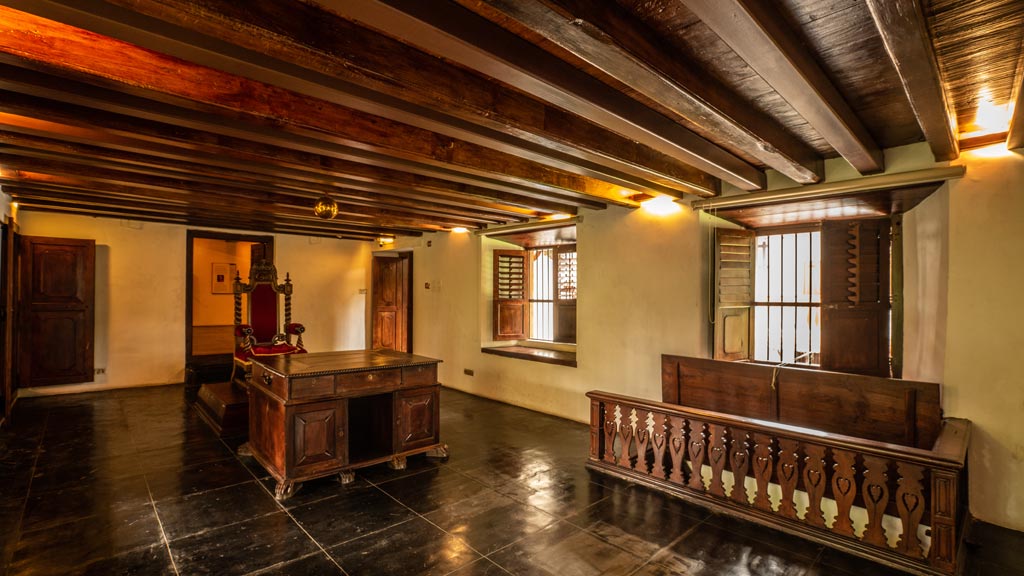 The architectural style of Paliam Kovilakam reveals a confluence of Kerala and Dutch styles. The three-storeyed building can be considered as a highly efficient functional building of its times. In spite of minimum ornamentation, the building reflects the Dutch influence in its architecture. The structure features elaborately carved wooden staircases, balustrades and thick walls with splayed openings. A circulation space runs along the private area of the building, facilitating air movement and insulates the interior, making it cooler compared to the peripheral rooms. In earlier times, women were not allowed inside. Only the elder members of the family could stay there. The Paliath Achans used to address the people of Chendamangalam from the Prasanga Peedam [speech pedestal], at the entrance passage of the palace.

Exhibits
The Paliam Palace museum chronicles the historic records, letters of the Paliam family and important events that took place in the palace. There are panels which give brief descriptions in Malayalam and English about the exhibits in the museum. Interactive videos comprising short clips in Malayalam and English about rituals, rites, etc. and interactive audios which provide brief descriptions about historical aspects are also available. The museum also provides guidebooks in English and Malayalam, and the services of trained guides.