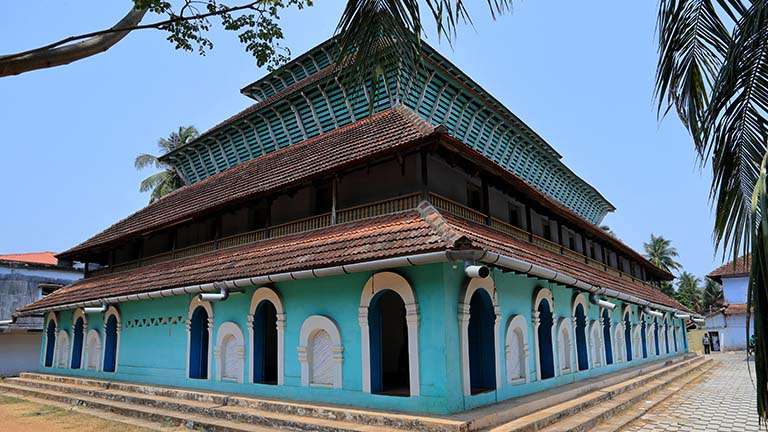 Mishkal mosque, the four-storeyed mosque situated in Kuttichira, has a history of more than 650 years. It is named after Nakhooda Mishkal, an Arab trader who built this structure.

Made of timber, the Mishkal mosque was initially five storeyed. But it was damaged in arson during an attack by the Portuguese in 1510. Though it still bears traces of the assault, the mosque stands today as the prime example of communal harmony, for it was the Zamorin, a Hindu king, who avenged his Muslim subjects by repairing the mosque.

This wooden mosque is an edifice that has withstood the ravages of time. The Italian-tile-paved entrance, 24 engraved wooden pillars that support the entire structure, 47 carved doors and the big prayer hall capable of accommodating around 300 people are some of the features that make this mosque a unique architectural marvel.

Unlike other mosques, the Mishkal mosque does not have cupolas and minarets. The intricate carvings on the walls and ceilings, and the Gopuram-style arches at the entrance show a noticeable resemblance to traditional temple architecture. The area inside the mosque is well-ventilated with Mihrab-style doors. During its renovation, a wooden Mimbar, or pulpit, with intricate motifs was added to the structure. Square and rectangular tanks, a few yards away the famous Kuttichira pond, are attached to the mosque complex.

Kuttichira Jama Palli
Jama Palli, situated between Mishkal mosque and Muchundi Palli, is a 14th century structure that has the largest floor area among the mosques in Kerala. It is capable of accommodating around 1000 people at a time. Wood was used extensively for the construction of this mosque. It has a circular structure with wooden panelling on top.

Just like the temples of those times, this mosque too has intricate wood carvings of lotuses and geographic motifs on the ceiling. The movable roof is another peculiarity of the Jama Palli. Arabic inscriptions are engraved on the wooden walls and rafters of the ceiling.

Muchundi Palli
Muchundi Palli, built in the 13th century, is the oldest mosque in Kozhikode city. The mosque has an interesting history which showcases the spirit of communal harmony that prevailed during that time. It is said that the erstwhile rulers, the Zamorins, patronized Islam and that the king donated the property for building the mosque. There is a stone slab in the mosque that narrates this story. It is inscribed in the ancient Malayalam script, Vattezhuthu.

The entire structure stands on a 1.5-metre-high plinth. The double-tiered roof with a decorated gable, the ceiling with floral wood works, the pillars with intricate engravings, and the wooden carvings of animals are all reminiscent of temple architecture, and speak volumes about the Hindu influence in mosque architecture. Inscriptions from the Holy Quran can also be seen in the mosque.