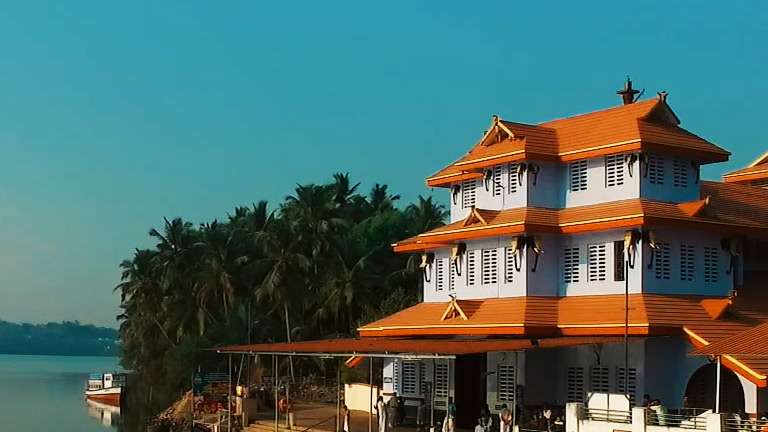 The Parassinikadavu temple is situated 18 kms northeast of Kannur, on the banks of River Valapattanam. The temple, locally known as Parassini Madapura, has many distinctive rituals and customs that mark it as distinct from other temples in the state. Even the three-storeyed structure, painted white, is different from the common style of traditional temples.

The temple compound is full of stray dogs. No one attempts to chase them out and they are allowed to roam around as they please. This unusual tolerance stems from a belief that dogs are the favourite companions of the temple deity.

The deity is Muthappan, an incarnation of Lord Shiva. According to a legend, a long time ago a child named Muthappan, who had an insatiable appetite for meat, dry fish and liquor, roamed the area. On account of his strange ways, he was cast out by his family. Sometime later, a series of incidents proved beyond doubt that the child was no ordinary mortal but one who manifested the Divine. Muthappan soon vanished without a trace, and the temple was built by the natives here, in his name, as he was believed to have been an incarnation of Lord Shiva.

One of the main offerings at the temple is dried fish and toddy. Such a custom is not known to be followed in any other temple in the state. The temple is also distinctive in that it allows entry to all devotees, irrespective of their religion. They may go around the temple and near the sanctum sanctorum.

From October to February, the ritualistic dance of Theyyam is performed every night at the temple premises. The Theyyam artiste, who performs in the beautiful setting, is able to cast a magical spell on the audience with his spiritually charged performance. There is a Kathakali club attached to the temple, and the authorities arrange Kathakali performances on prior request.